Hey Guys!
This is an outfit which I wore to work last Saturday.
It’s casual wear really as it’s a relaxed environment at the drama group. I based my outfit around the leggings as it is essential I can move easily- especially with the little ones! I chose a patterned star print top, which is looser than the leggings and make the look more casual. I wrapped a thin brown belt around my hips to create a break between the block of black. I added a cropped denim jacked and chose a lacy bow to wear in my hair. The combination of the denim jacket and bow reminds me of the 1950’s which I love. The pink trainers stand out against the rest of the colour scheme, but not too much.
Cheeky: I wore some black tights underneath the leggings as it was a little chilly! This also works well if your leggings have seen better days and have become thinner and see through. The black tights make the leggings look opaque again and you can get plenty more wears from them before you need to get new ones.
Better than a standard uniform? 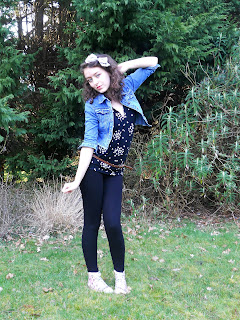 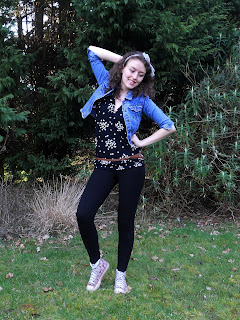