Hey Guys!
Another pretty dressy outfit yesterday, but I switched it up a little and went more grunge over girly. I got lots of compliments about the look, even from the little ones! But he said it looked like a China dress- I think that’s a good thing? Couldn’t decided between 50’s and 80’s comments. I get the 80’s, kind of Madonna look thing and then 50’s from the dress. 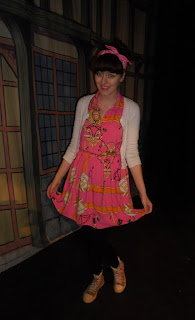 The dress is currently on sale in Kylie at the mo, and it’s only £5. I’m sure I paid at least £10! Oh well! I wore black leggings underneath the dress because it was a little chilly, and the opaque black went well with the graphic scarf print on the dress. I added pink camouflage converse and grey hoodie to add a hint of grunge to my look, instead of pretty pretty which was like sooo the day before! What would have also looked great is a belt where the dress is elasticated around the waist to blouse. I have skinny tan belts which would have worked well, but it doesn’t look too naked without it.
For a more modern twist I accessorised with the tied pink head scarf. But it also made my hair look a little 80’s.I’m totes devo atm, I’ve lost my bright pink BarryM lippy! It would have been perfect with this dress, but instead I used a slightly wetter lippy, FAMOUS by Sue Moxley (Never heard of it, it was a freebie at BINTM Live). I like the BarryM one because it’s thicker and more paste like which assures me it isn’t going anywhere during the day. But I used my pale pink lippy over the top and then added another layer of the bright pink and eventually it set into place for the day. Pretty impressive, as when I’ve previously mixed two lippies together they wear off super quick!
I had an extra layer of the white cardi for when I’m in between hot and cold. HeHe! This makes the outfit more girly but the converse keep the essence of grunge. 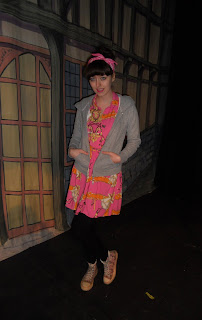 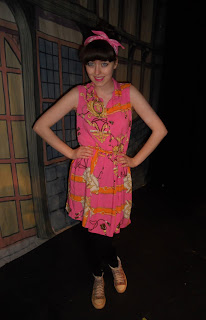