Finally, after being on my holidays for over a month and a half now, I got to see my Buddies! 2 of them decided to ditch me for Uni and so didn’t finish term until last week/2 weeks ago. And then the cheek of my main man, he left me for a 10-week gallivant across South America!
This is where the title of my post will start to make sense. Rihanna famously once said, “We found love in a hopeless place”, and now I totally gets what she meant. Basically guys, I found love in a hopeless place and that hopeless place was Pizza Express. But of course Ri-Ri couldn’t sing, “We found love in Pizza Express” (even thought it still kinda works). His name was Mason and he even gave me his number (well, his number to fill in a survey about my Pizza Express Experience). To me he looked more like an Oli since he was almost a doppelganger for @OliWhitetv. First of all, I did notice he kept asking me if we were O.K for drinks, and if we wanted to order, pudding etc. I’m the least likely to be in charge in my group since I’m the youngest and look about 12 compared to the others. But then once we’d asked another waiter for the bill, Mason came bounding over asking if we wanted the bill (It had been about 20 minutes since we rejected pudding and assumed the bill was coming our way). When he came back he was laden with gifts for me. Well, he brought those little money off cards for each of us. But as he was explaining the deal, I realised he was only rally looking at and talking to me, then I heard my friends sniggering and I noticed his hands were really shaking and really I have no idea what the cards are for. I thought my friends were laughing because he was obviously besotted with me but it was because appaz I was going really red, #Mortificado! How cringe, because he was actually pretty cute. Maybs I’ll go back next Saturday and try again… HeHe!
Well, now I have explained myself I can talk you through the look. I was super annoyed with the weather because I had a really cute outfit planned and was all ready to go and the heavens opened. It had been sunny then rainy then sunny then rainy…and so on. So I changed into this which I nowhere near as summery and girly. I was genuinely really upset, which is really silly but I thought since we haven’t seen each other in so long I wanted to look at least decent if not pretty. But I went with this and in the end I don’t think I looked too shoddy, I hope. The jumper is my final purchase to show you from my New Look order. It looked a lot thicker online so I was deceived by how warm I would be. But I suppose it does make a good summer jumper for days when you want something that is kind of warm but also cool when the sun does make an appearance. I love the dip dye look, a great summer feature! I chose pale trousers to almost mimic the dip dye pattern but in reverse. I also think that the pale colours suggest summer better over dark colours. Since I finished Uni, I feel like I haven’t worn my leopard print boots in forever! But I had to walk home from the bus stop, and it was VERY muddy, so these were the only option really. Black boots wouldn’t have looked as co-ordinated.
To add some slight elegance to the look I’m wearing my Paper crane necklace and my golden cross and chain ring-bracelet combo. I slicked on the orange lippy, which I am loving so much right now! And a messy sock bun completes the look. I call it messy because I did it with au natural curly hair. I usually brush it to smooth out the edges. But I like the texture the curly hair give my bun.
Check out my mac, now who could say no to that! 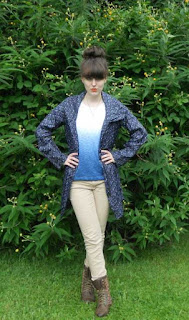 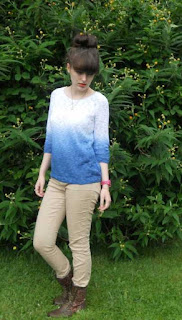 ‘We Found Love’ has actually just come up on shuffle. WE WERE MEANT TO BE!