Hey Guys!
This is a dress that I got for Christmas from my sister. (She had no option, I tried it on in front of her and she had no present idea, so I told her she could get it for me there and then. If you want something doing, do it yourself! HeHe!) Lots of compliments about the dress. Good Times! I wore the paper crane necklace my other sister gave me with this look too. I love putting together an outfit made up of presents, I feel so loved!
Although you’re not meant to team dark blue and black, nor are black and brown meant to be seen together, as they are very similar to each other. But when there are fashion rules, sometimes they’re meant to be broken. So I chose to work the blue and black colours from the zebra print of the dress and build up the rest of my look from that. The dress has a built in black slip, which means that the tights don’t get caught with static to the back of the dress. I chose tights as opposed leggings, because they give the same see through effect of the dress fabric, chiffon. A pair of leggings would have been to opaque and not worked so well. It keeps the whole look light and airy. The cardigan I chose has a knitted design which is quite holey, so again it keeps with the thin material appeal. The belt which is slightly hidden by the blousing of the dress, in th image, has a golden buckle therefor I was restricted the golden accessories. I chose a golden necklace, golden swarvoski crystal elasticated ring and large blue handmade beaded ring. Which upon reflection I’ve realised is actually made with silver metal. Scandalous, I know! But the beading is so big you’d never be able to tell. My Mum beaded the ring together, so yet another present!
Since I bought these black dollie shoes in October-ish I think, I thought they would be really useful and I’d wear them all the time. But to be honest this is one of the rare outfits for them. I hope I end up wearing them more over Spring/Summer. They do squeak when I walk, I think because I’ve got the heel insole in them as they are slightly too big. But my feet appeared to have stopped growing at a half size. Useful, not!
I’ve twisted the side of my hair and pushed it forwards slightly. Similar to my Suicide Roll hair, found here.
A Voilà! 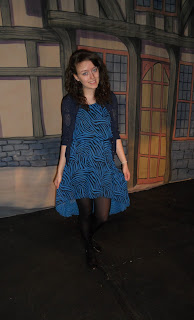 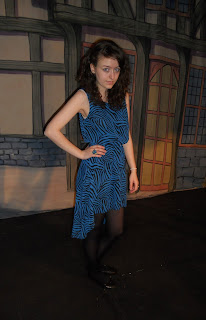