Don’t worry it’s not infectious! HeHe! So here in the U.K it was Comic Relief night on Friday, which is a 7 hour fund raising telethon. It didn’t do too badly, raising £75 million this year. Record breaking stuff! Each year there is a single which profits from goes to the Comic Relief Charity. This year it was done by One Direction and guess who got to go to their pre-record at the BBC Friday morning. This girl!! I was actually super excited, but thought I may be one of the older ones there. The age restriction was 16 so thankfully I was one of the crowd! It was super fun and I even managed to catch myself on the tellybox more than once during their performance. Me and my friend had really good standing spots at the front, but unfortunately/fortunately we had a glorious view of their bottoms when they performed on the runway part of the stage. Oh well, at least I got my fix!

This is what I decided to wear. Comic Relief’s “colour” is Red, so I fully embraced that with the paper bag waisted red skirt and red lippy. We were waiting outside for over an hour (then told we only made stand-by tickets! But luckily they let us all in) so I dressed warm with thick tights under the leggings and boots. In the piccys I think the cardi looks a little frumpy, but without cardi looks totes amaze. I had to get a little bling in there with the jewelled owl necklace. I pinned my hair back into a bit-up-bit-down style because my hair is prone to frizz. In a studio environment with hotter lighting it defo can’t control itself. But by pinning the shorter layers, more prone to expand in size, back it keeps my locks looking lovely!

Some girls were waaayy too OTT and excited. Even Dermot (O’Leary) said they were annoying. Then they bombarded the stage, and the boys face’s were like “WTF! HELP ME!”. One girl got caught by security and bounced off their arms. I can imagine she suffered a painful winding from that. Then whilst we were exciting from the stage one of the “hooligans” was being ushered past with an important looking person and I noticed she’d appeared to have sliced her had. (I don’t know how or on what, there wasn’t anything sharp there!) But I let her know that “that’s what you get if you decide to be boisterous and jump on stage“. But natch, I looked really sweet in this outfit so she’d never have guessed it was me who said it. HeHe! 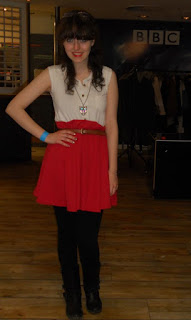 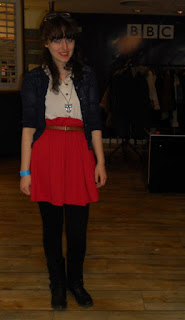 “One way or another I’m gonna find ya“, I found them at the BBC!
Natch, I’ve got the vid for the song on while I write this. It’s so cute! Like me, what a perfect match! HeHe!
Oodles and Toodles
Row Bow
x﻿