Hey Guys!Yesterday I took a little trip on the train over to London, with the fam, and we went to see the Women’s Marathon from the Embankment. OMG, the weather was totally horrendous! The poor runners had to run for a little over two hours with it tipping it down. Here are some of my piccys from the day:

Considering they had done 19 miles in these photos, they were still going pretty fast. Fast enough to get an action blur! The runners above are our (awkward moment, I don’t think my keyboard actually has a hashtag key. Oops!) “Hashtag” TeamGB girls Freya Murray and Claire Hallissey.
The day was really good despite the rain. But it was free so we couldn’t complain really. That’ll be why you have to pay for the other ticketed events- so you can keep dry throughout it, hehe!
I’m not gonne lie, the outfit I chose to wear in the end was my 4th choice! On days like this I know that I’ll will be there forever in the morning deciding what to wear so I always plan the night before. I go for an outfit that I’d like to wear and one that if the weather isn’t so great I might wear instead. But yesterday morning as soon as I opened my curtains, my original outfit and backup outfit went straight out the window because I knew it would have to be a “raincoat-over-the-outfit-I’ve-spent-hours-planning-and-perfecting-so-nobody-is-going-to-see-much-of-it-anyway” kinda of day.
After a couple of different decisions on what top to wear, I went with a simple plain white button-up top and jeans. I felt really dressed down for such a big event as the Olympics, but the only time anybody got to see it was when I took the photos below.
I did get to jazz it up a little with the necklace. Although it swivels around regularly, side with the colours jewels visible is the front. It’s really sweet owl design that was a prezzie from my friend on my birthday. I was also having a meltdown over the state of my hair last week so I wore it in “mermaid waves” over the weekend. But as the elements were attacking if from all angles it turned into a major frizzball, but at least I got to practise my french plait skills and man, am I good now. HeHe! 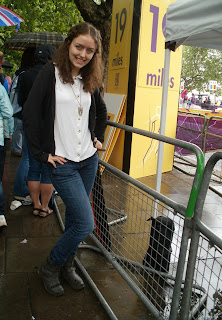 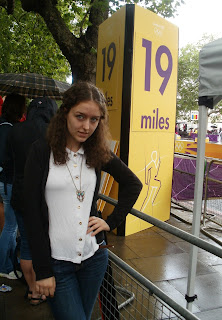