I made a rare shopping trip into the outside world the weekend before the end of term, and picked up this amazing skirt. It’s from Republic, since they were closing down, from the AX Paris line that’s in there. Only £8, from something like £22, total barg! It’s so totally different to anything else I have in my wardrobe and isn’t something I’d typically go for. But I think it’s fantastic! It was the perfect way to end my brilliant time working at the school. Out with a bang! We had a leaver’s service in the morning on the last day of term, and all the parents of the year 6’s came and I was sat at the front with the rest of the staff. One of the year 6’s has an older sister who was the year below me at school. Their Mum was telling my how their Dad pointed out, ‘That lady’s skirt is very unusual.’ And they she told him ‘that lady’ was Row Bow. He couldn’t believe it! I like to think I’ve blossomed since primary school.
In my outfit picked up on the orange colours of the skirt and wore an almost neon orange crop top, tucked in. I paired it with a navy blue cardigan, as orange and blue are complimentary colours so against each other they appear to be brighter and bolder hues. I kept my shoes reasonably simple so all the attention was on the skirt. Also, since I’d worn these before I knew I could last the day in them.
I think that the golden spiked necklace works really nicely as it flares and covers top bare skin at the top of the look. So the complexity matches up to the visually exciting skirt. I also had a big flashy ring on and a slightly subtler (but equally as sparkly) ring on the other hand.

From my time at the primary school I think we can all safely say that I would be the trendiest teacher ever! Looking so fly every day, Miss Row Bow! 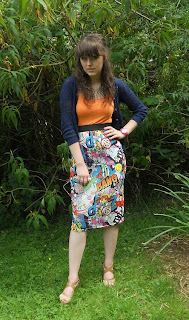 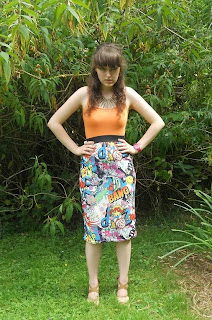 I feel a little late on the bandwagon here, but that’s because I am so set in my ways that if I don’t like the name of a song I probs won’t listen to it. I’ve seen Iggy Azalea’s song Bounce on my telly box on EVERY music channel and I don’t mind because I bloomin’ love it. I like that whole Indian Wedding celebration thing, it’s because she doesn’t drink so she didn’t want an alcohol fuelled party in her video. For that reason I love it even more! But, upon constantly hearing my 4 fave collaboration of boys mention her song Workin interviews, I finally pressed the play button. And now you just can’t stop me getting my swag on when it plays. There’s no going back now! P.S I love her hair.