Hey Guys!
So today was the all important results day! I hadn’t been worrying about it at all until my friends mentioned that they were panicking. I thought it was tomorrow anyway, whoops! I felt so blasé about it, I managed to sleep like a log last night whereas normally I would be thinking about it all night. I think it was because I knew that I couldn’t change the results and I couldn’t have done too bad. I’d drummed it in what I thought I would get, and I must be a fortune teller, or something because, that’s exactly what I got.
This is the outfit I wore to pick up my results. I was going to go more summery but it was chillier than I expected. So I went with the cropped jeans, to keep the “Summer” vibe and a simple white vest top. I went shopping yesterday and finally managed to have a peek in Zara. Normally I would say they are super expensive and I would never be able to afford anything from there. But they do have some lovely things. I was persuaded by a friend who found some pretty snazzy leggings for £10, from Zara that’s a total barg! The first thing I saw was a gorgeous emerald green, drop hem skirt. But unfortunately it was only in a large. Don’t get me wrong I eat a lot, but not that much! So I had a rummage in their jumper pile. I didn’t want to spend too much so I was picking and choosing between several pieces. This green cardigan was one on the items I chose to purchase. It’s lovely and soft and cosily warm. The crochet design on the shoulders makes it different from my other cardigans, as does the colour. The only thing was that I decided to remove the label from it which was strangely positioned on the front collar, and the ribbon across the back (used to help hang up the cardi) was restricting the fit of the cardi so I removed that too. Just grab a Quick Unpick and carefull go about cutting the stitches. I didn’t realise until this morning that the front was longer than the back, but it still looks pretty. 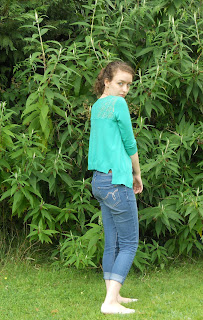 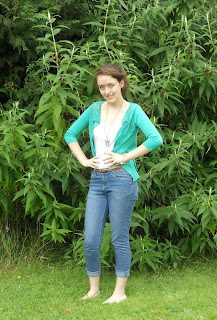 I’ve not really been a jewellery fan until now. But now I love layering up my rings and bracelets, whereas before I would have been pushing it to wear one. Since I first saw the bracelet-ring combo pieces, I’ve been desperate for them. I couldn’t find any anywhere but it turns out I’ve been looking in the wrong place. I don’t usually go into Miss Selfridges, but with 70% off you can’t say no. I’m so glad I did go in though because check out this bad boy I found. It has an adjustable ring which means it’ll fit over the chunkiest of fingers, like mine. And the best thing?…It was only £1 and I though it was going to be £2! I love the blue, orange and white colour theme.  I teamed it with a HultQuist ring, that I got for Christmas, and another gold framed bracelet, which I think I found when I was like 6. 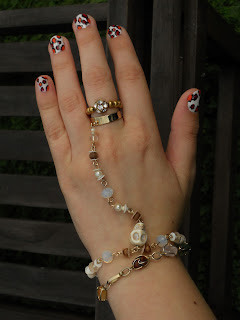