Hey Guys!
So yesterday, as I showed of my new ring-bracelet combo, you may have noticed the funky little design on my nails. I’m not gonna lie they were meant to be normal leopard print nails but they still look cool and a little bit grungy, I think. This is the post about normal leopard print nail art, but I thought I’d just let you know why and how I got the look. These are my nails: 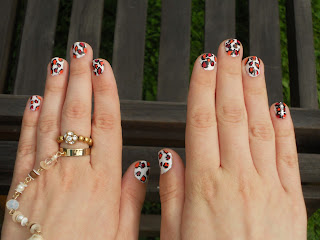 I started by applying the white as a background colour. Then I painted lots of red and orange dots randomly across the nails. I usually use my liquid eye liner to create rough outlines around the colourful dots. But as my eye liner is just a cheapo Primark one, which has a stiff brush, it has begun to split. This means I can no longer draw neat circles around the dots, but now a scratchy effect it created. The piccy below show what I mean. I also found that the liquid was kind of repelling on top of the nail varnish, which left edges that look fluffy and fuzzy. I think that the outlines now look like when somebody has sketched something and it’s a little scribbley. My left hand looks better as I feel the right had is a little crowded and the outlines are thicker and less sketchy-like. It makes it look more messy and doesn’t cover up the fact I didn’t mean to do it like that as well!﻿ 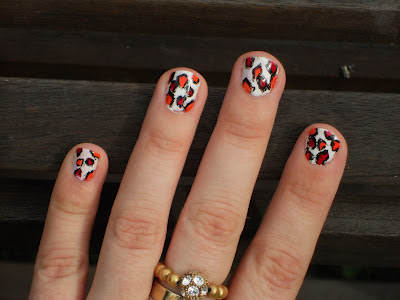