Hey Guys!
Super duper exciting day today (today being when I wrote this post at the end of July 2013). You can have three guesses as to where I went…nope…guess again…you clever sausage! Of course I went to Hearst Towers (I suppose you’d call it?) and had a little chat with some girls from Company mag. Excitarama!Basicals they tweeted out asking if anyone had worked at their first London fashion week February just gone, as we all know I did (exhibit a b c d e f g or flick through my twitter for a refresher @rowbowk ). So I tweeted saying this babe right here did! Well, a little subtler than that but we all get the picture. I thought I was the only one who had replied so didn’t think much of it. But then when I took a glance at my e-mail, what do y’ know but Company have only gone and e-mailed me asking if I can tell them all about my time. I felt sooo popular!

So after numerous e-mails I finally got to meet the mysterious faces I’d been e-mailing. We went to a cutesy little tea shop and had all my ramblings recorded on a Dictaphone  that means someone will try to make some sort of sense I everything I said. I hope I was useful and provide lots of insightful deets. I’m not really sure if you’re meant to divulge gossip like that but I wouldn’t define it as gossip. More ‘witterings’ about London Fashion Week. Then we went outside to try and get a shot of the beaut of an outfit I was wearing. It was such a miserable day, where did the sun go? But I’m an actress darling, so pulled of the,”Its not raingig its a glorious day” look. And guess where these were going to end up…? IN THE FLIPPING ACUTAL MAGAZINE! Man I am super stoked and can’t believe my crowing moment is already here! I’d like to thank my Mum and Dad for making a blooming marvellous human out of me, first great western for providing the trains for me and lastly to me for actually going to London Fashion Week in the first place. Hehe!
(UPDATE: The weather was so bad that I ended up re-shooting similar street style photos at the back of the local fish and chippy. But in the mag you’ll see they didn’t use them. I sent them a range of photos since they said they might make a collage. For little headshot they’ve used a piccy with me in sunglasses. I can tell it’s me, but let that be a lesson kids. NEVER SEND A PICTURE OF YOURSELF WEARING SUNGLASSES TO A SUPER POPULAR MAGAZINE. They might only use that bit. I’m still dead chuffed to be in it, the article is pretty fab!)

So I wore something eye-catching since I had a little inkling that I would be photographed even if it didn’t end up being on the front page. This is my new skirt from Republic, part of the AX Paris line. Lasttime I went with an orange theme. But here I picked out the darker blue and black. I wore my bright green denim jacket over a black vest top. I chose silver jewellery as well since the buttons on my jacket were silver. I even braved the heels! (Although to be honest I stopped at a Pret next door to the Hearst Magazines building and changed from trainers to heels. But we can keep that between me and you!) It was actually a really horrible day and pissed it down the whole time I was in London, but it was really sunny when I got home. #sodslaw. So when travelling I have my beautiful floral rain mac shielding me. 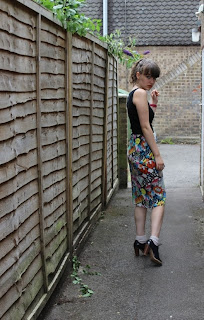 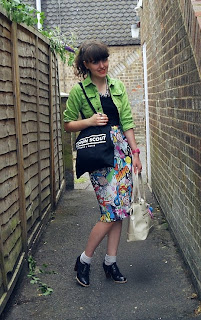 I can tell that you’re all excited to be able to hold a Row Bow feature in your own hands, and Company the October issue “edited by the interns” is out right now! Buy, buy, buy! 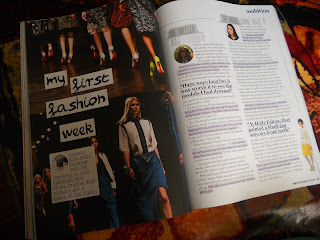