Hey Guys!I admit it, I went into Poundland the other day and bought more cheap nail varnishes! But the value is soo good and to be honest the quality isn’t too shabby either. I got a deep blue and bright orange, and they are sizable pots too. It doesn’t beat Tesco’s 99p nail varnishes though! But they come in smaller pots.
I’m sure the quality is better, but, personally, I don’t see the point in buying any nail varnish over £4 MAX! All mine seem to chip anyway. I would only spend over if I were to invest in a larger pot of clear coat nail varnish. Man, I go through that at some rate!
I decided to use all my new nail varnishes, and an old red one, to produce these bad boys! I’ve put two colours onto each nail that meet at a straight line down the middle. At first, I reached for the sellotape to help me with the straight line borders, but I found when using sellotape to cover most of my nail, it rips of the base coat when I remove the sticky tape. So sellotape is best used in smaller quantities. Instead, I used masking tape and this works much better as it isn’t meant to be used as a permanent fixture so it isn’t as sticky, but still gives a straight edge to the polish. I painted one of the two colours on each nail first, and did it over both hands. I then tried using the masking tape to paint the 2nd colours, but it proved a lot easier to do by hand. Even with my left hand!
Then apply your top coat and check it out: 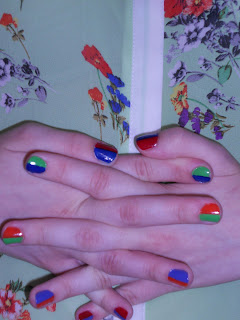 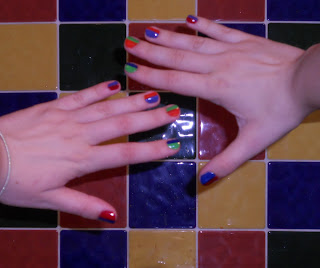