Hey Guys!
I posted about his dress last summer. I wore it to our summer performance at work and I teamed it with a regular black cardigan and some brown lacy dollie shoes. I think that the combination I have gone for here is far more summery and looks more lady like. I got lots of compliments at work for its tribal

It came with a shiny, uber skinny, tan belt, which is what I wore it with last time. But here I have choses a regular skinny black belt from a skirt I own. I think that this belt works so much better as it mirrors the black lining to the neck line and the wide black stripe around the bottom of the dress.
I can’t believe I’d never thought of wearing these red wedges with the dress before! Although the red isn’t an exact match to the tones in the dress, it works so well as it also have the straw/tan tones in the wedged sole. I accessorised with golden bracelets and rings which co-ordinates well with my golden headband. It’s as if I planned it or something! 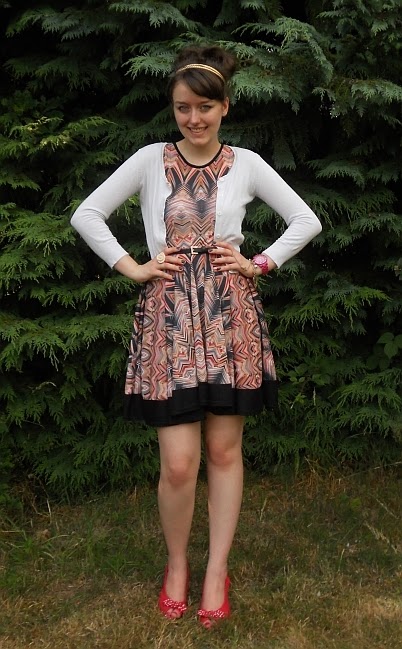 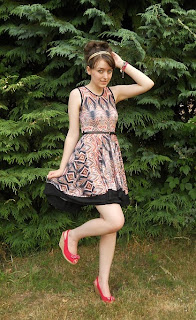 I liked A*M*E when debut surfaced, Play the Game. That was when she was assigned to Gary Barlow’s record label. It’s my understanding that that has gone tits up and no longer exists. But since A*M*E had the tune Need U (100%) with Duke Demont, she’s been lucky to keep the career going. I didn’t realise she’s actually put another song out called Heartless since it didn’t chart. But her new tune is defo pretty cool, Hear Me Out. She filmed a video with Hunger TV (Fun Fact Alert: the same channel Rita Ora filmed her Facemelt video featuring Cara Delevingne with!) I love the golden sparkly jacket, so snazzy!
Oodles and Toodles
Row Bow
x