Hey Guys!
On Friday I went out to a little drinkies session with peeps, which was kind of a birthday thing for my friend. I was assured I didn’t need to bring a pressie, so natch I felt awful when everybody else tipped up with pressies! So I’ve put a little mention of her in the post instead.
I didn’t want to go OTT on the glamness, so I went with a smart causal look. I stuck a colour scheme which fits with the pastel colours trend for S/S 2012. Although it doesn’t feel like summer, so that’s why I wore beige/tobacco colour trousers and a pale pink jacket, which is nice and toasty. I wanted something I could wear out that wasn’t a coat, because it gets depressing when you tell yourself it’s July but you still have to put a coat on! I liked this jacket so much I bought another one of the same style but in mustard+black.
I wore a black vest top underneath the lighter white top. This was mainly to keep warm, but it gives an interesting layered look too. I tucked the black vest in so that the white top could still be loose and wouldn’t cling so much. I chose to accessorise with a long, golden, apple necklace which goes with the golden buttons down the front of the white top.
Obviously I had to inject a little glam into my look so I teamed my look with the navy blue heeled brogue style shoes. I usually would wear darker colours for an evening do, but this outfit was totally pale. So the addition of the black vest top and dark shoes adds a little more of an evening feel to the outfit for me. 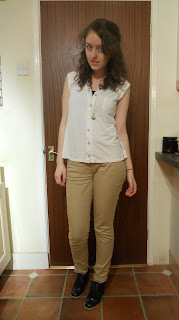 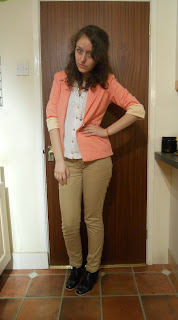