Hey Guys!
This is my take on the big S/S 2013 trend of monochrome. I love my bright colours too much, so I had to incorporate them in some how! The dress is white with black polka dots and collar detail. Since it was a very chilly day I added thick black tights and black dollie shoes. I also has a trusty slip on underneath so the bottom of the dress doesn’t catch and rise up my legs throughout the day! The dress came with the thin waist electric pink belt. But I’m not too keen on it so I added the green into the look as another accent colour. I think it balances out the pink, as green and red are complimentary colours and pink is a hue withing red. To be honest that particular shade of pink reminds me of year 8 girls trying to me all ‘retro’ with leg warmers and trying to be 2kl4skool, as the cool kids say I’m sure.
I got the ring for Christmas from a lovely family who I babysit their triplets- girl of many talents me! I got loads of compliments and I love the fact that it is super chunky and big without looking cheap and tacky. The bead work is beautiful, although it’s got nothing on my Mumma’s work! In case it’s not that clear, its an over sized flower. Tonally it fits better with the pink belt, but shade wise it obviously goes with the green cardi. That’s why it works so well, as it ties in all of the other colours really well.
I didn’t feel that I had that much make-up on since I only had my eyes and lips on. I don’t wear foundation, hence my b-e-a-utiful skin (even if I do say so myself!). But one of the kiddies said ‘You don’t need anymore make-up! You’ve got loads on already! You’re COVERED in it!’ I did explain what I had on, but I think it was wasted as I’m sure she went of to pretend to be a helicopter, or something like that! On my eyes I have green eyeshadow with a pale base, similar to the ring’s colour with dark olive green at the corners. And a metallic green liquid eyeliner, black mascara and pencil liner along my waterline. Then the pretty fuchsia pink BarryM lippy on. For a 7 year old that would be too much. But for a big girl like me I think its quite alright!
I’m loving Fall Out boy’s new tunes. I liked My Song Know What You Did in the Dark. But now…Have you heard Phoenix, their next single?! OMG, I will never get tried of listening to it! Not to mention in the video Patrick Stump is all skinny mini, cutie bootie now!
Check it out! 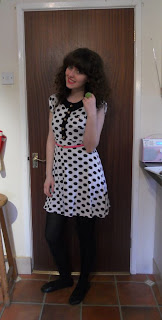 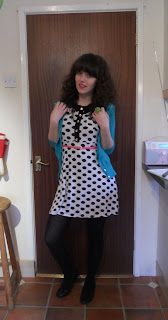