Hey Guys!
This is a simple outfit that I wore to uni. I think that it’s quite different from what I usually post and wanted to show you. I’m not one for big baggy jumpers, but in this look I think it works well. The addition of the gridded chain necklace weighs down, flattening the baggy-ness of the jumper. It also makes the look more feminine as I think that’s why baggy looks don’t suit me. I have a naturally really girly appearance, so unshapely garments look a little peculiar on me. That’s also why I teamed the jumper with jeggings because they are tighter and show the silhouette of my legs. The biker boots at the end finish of the look with that masculine vibe again.
The jumper is actually a ‘Unisex’ aged 16. So I thought it would be just right. But when it can through the label says Boys Age 16, which would explain why it’s too big. It’s from Tesco School Uniform range, which is a good place to shop if you want a large block coloured jumper as it’s cheap for parents to buy from. Also they should be made to last all the rough and tough ramblings of school life!
When taking photos me and my little sister had a mess about with some camera trickery. Fortunately/ Unfortunately I have a really animated face (it’s because I’m an actress darling!), so if the piccy scares you I’m sorry I don’t know what came over me!
Whilst writing this post I’ve been listening to the debut tune from The Risk (from X Factor UK 2011), Missiles. It’s pretty good and a little different to what I was expecting. The only annoying thing is that they don’t pronounce Missiles correctly. It comes out Miss-ules! But I’ll forgive them sing the song the rest of it so beautifully. It was released in January, but I don’t believe it charted so I’m doing my bit to promote them. Andy is my fave, so y’know #justsaying. 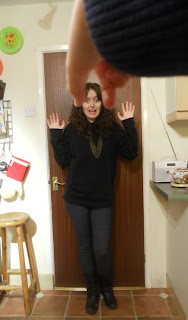 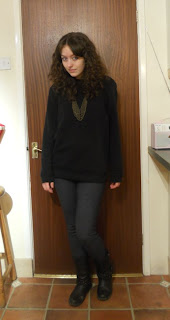