Hey Guys!
The reason my Top Tunes Tuesday post was quite late this week, was because I was entertaining guests. I was socialising with ma gurls, before they leave me for each other and a little flat in Sussex (Uni basically)! We do little Come Dine with Me style lunches/dinners, where we each cook a different meal and we take turns to host it. This time it was my turn to do pudding. I’ve been watching Great British Bake Off and had totally been inspired to bake something other than a sponge cake. However, it had totally slipped my mind that I might need for collect ingredients to make anything so I rush out in the morning at 9, to pick up some ingredients for an apple and vanilla tart. They were arriving at 10 so I tried to sort it all out for then. It was super simple to put together, but I was still late and it was only half made when my first bud arrived!
This is what I changed into after she had arrived, but before my other friend came. After seeing her making the most of the last bits of summer, in shorts and pretty chiffon blouse, I thought my trousers and woolly top was a little too wintry. I had to put some shorts on underneath the dress, because it would appear that I have grown since I wore this dress last. For cooler months, leggings will be suitable too. I love the print on this dress because I bought it when laser print patterns were trendy, circa 2010 I think? With the zip being at the front I think that it looks a little unusual in terms of the design of the dress, as well as the design on the dress! I wore a simple white cardigan and white dollie shoes with it as the dress it so colourful itself, I didn’t feel I needed to add anymore. 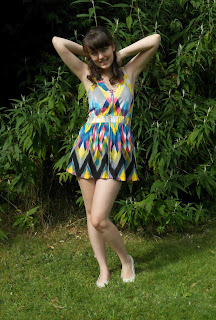 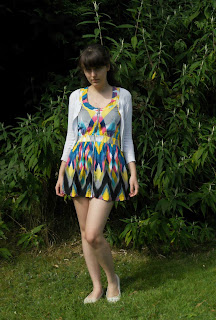