Hey Guys!
Yesterday I went to a last minute summer BBQ. It was a chance to see some old friends form school before we all head off to Uni or other adventures next year. I’m not even joking, but this was the third outfit I finally chose. A previous choice was a top and some shorts and I went through at least 6 different tops before changing to this look! I wanted to look nice but not too dressed up as it was really a party, it was more relaxed. When I arrived my friend were surprised because 1) I wasn’t too late, only 20 minutes, and 2) I wasn’t over dressed. They know me so well.
I chose to keep it simple and continue with the colour blocking trend, with blue, white and an almost terracotta shade of orange. Blue and orange are complementary colours. This means that when they are placed next to each other the blue appears bluer and the orange appears more orange. They appear to have a stronger colour to them. There is a lot of texture to the skirt, which I think mixes it up from the usual attention on the top half. I have pulled the skirt to around waist height, which is where the denim jacket is cropped to. So there isn’t too large a band of white looking out of place. I thought that the area around my neck and top of my chest looked a little bare, so I added a long golden apple necklace. I think a shorter one may have worked just as well, but I don’t feel shorter pendants suit me as well. And to finish my look I chose a gold and purple gem ring.
This was the first time my friends had seen my fringe, so I put the rest of my curls back into a pony tail to highlight my new barnet.
I ended up bringing any actual food to put on the barbie, so lucky I was those 20 minutes late while I picked up some grub! 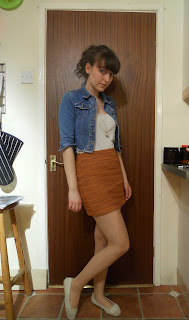 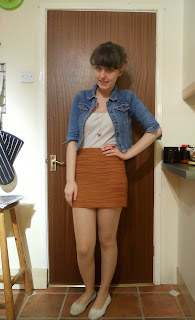