﻿﻿﻿﻿Obviously, the statement piece of this outfit are the scarf/chain print trousers. (Awful grammar there, but I didn’t really know what sounded correct. English wasn’t my best subject, hehe!). So to keep the focus on the trouser, I chose a plain white vest top and black cardigan. This works well as they are key colours in the jean design. With there being a chain print on the jeans, I added chunky gold chain. (My inner “gangsta” is revealed- shame you can’t really see it in the photos) I thought the statement jewellery is a little Jessie j too. This was something I found in a box of goodies from my Grandma’s house. It reminds me of the gold chain worn as a belt around the hips of 60’s/70’s flares.
I have been experimenting with my hair, as it’s got to the point where I’m growing it and it’s at the “Bleugh” stage. So I’ve experimented with what should look like mermaid waves. But I think because my hair is so thick, the waves separate too much leaving it looking frizzy. This was after a day at work, I’d been dancing around and running around after little kiddies so that might be why it looks a little whithered! I wrapped a square piece of material round my hair in a 1950’s fashion. It’s originally for a bandanna, but if you fold it into half , like a triangle, then roll it until the end point is in the roll, you can use it more like a headband instead. Because the pink of the bow, I chose to team the look with a bold, deep fuchsia, coloured lip stick. That way it’s not totally mismatched.
I finished the look with my little white shoes, which I would say are a must have in any avid shoe collectors wardrobe because they go with all outfits. Especially with the one which look great in the mirror, and then when you realise you wanted to go out find you have no shoes that match!
Here are some piccys. 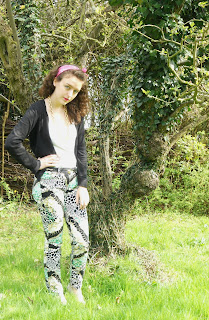 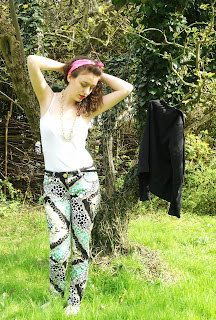