Hey Guys!The top and skirt in this outfit are new, so I was cutting the tags out this morning and noticed they said Funky Tribal by the bar code. So that’s what I have called the post. The top has a purple vest top which is worn underneath a cropped, sheer, t-shirt. Silly me, I originally bought the top last week and though that the vest top was a little tight but maybe it was supposed to me like that. When I got home and put it on, I realised that the vest top was actually 2 sizes smaller than the cropped top. What a numptey! But after a simple swap I was able to flaunt around in it today.
The skirt incorporates the colour of the top but only in a small quantity, so it doesn’t appear too matchy, matchy. I really like the tribal pattern, as it wraps around the skirt. When shops do their new collections they design piece which can easily be worn together as they have similar colours or patterns. When in the sale this is great as we can easily pick up a whole outfit for under a tenner, or fiver in this case!
I’ve slipped on a little pink lippy because I felt that it needed a little something as interesting as the hair (as I didn’t have any other make up on!). My hair is 1940’s inspired and I’ll have a little post on that over the weekend. Maybe not best worn in front of a 12 year old, as they laugh as soon as you step into the room! But for a party it’s a really cool and unique way to wear your hair. I felt that my hair looked a little flat on top, which didn’t go with the loose, baggy top I have on.
I’ve chosen to wear wide trainers for my footwear because I think that it gives a good contrast between the glam hair and lippy. I was going to wear some yellow flip-floppy sandals which would be good for a summer sun stroll. 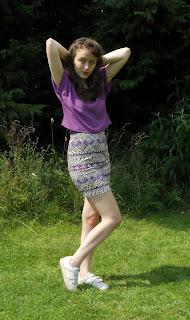 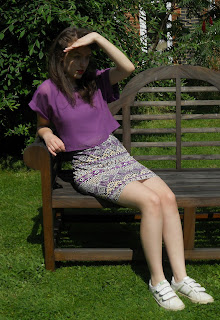