Hey guys!
I’ve done some more lady-like socialising this week, as I met up with my friend and her friend for coffee. Her friend is going to the same place as me next year so we got to know each other before term started. As I was meeting someone new, I didn’t want to appear to dressed up, but I still wanted to look presentable. Also, the weather was super rainy! I got totally drenched walking back to the car afterwards. Even though I had a brolly with me I was totally soaked! Anyway, this is what I chose to wear.
The large, woolly, mustard jumper has made a come back. I thought I’d show you another outfit it works in. I’ve got my trusty jeggings on, which are simple and plain so the Mustard Yellow can really “Pop”. I wanted to wear another pair of heels, but they were also dark blue, so it would hvae been a dark blue over kill- not cool! But these boots, I think, say dressy-but-still-relaxed-and-caj. Also, the heel isn’t big so I could get away with teetering around town for ages (and running in the downpour). The brown colour of the boots is an earthy tone and fits with the yellow as it is in a similar colour pallett.
Whenever I wear something big & baggy, I usually team it with a long necklcace. This elongates the look, so you appear taller and slimmer, instead of shorter and rounder from the effect of the baggy item. Here, I have worn my owl necklace which has a few coloured jewels that catch the light nicely. I chose not to wear a ring as I knew I’d end up loosing it in next to a sink at the loos somewhere! However, I did choose a lovely chunky braclet which has the same dirty gold colour in it as the necklace.
Not gonna lie, my hair is currently slowly becoming an uninspiring/lifeless Afro- nowhere near as gorg or fun as the real thing. Basically, it’s a total mess! So I decided to simply wrap a headscarf around it. I tied back my hair into a neatish bun. Then I wrapped my scarf around twice, and as my bow is already tied in, I just positioned it nicely. My friend commented on how neat and perfect the bow was. I accidentally revealed my secret that the bow was already done up, so I’d had many attempt to get it to look so lush!
Also, kudos to me, I’ve had deep blue nails this week and according to my US Glamour mag, I think, that deep blue nails are totes on trend! I’m such a trend setter, teehee! 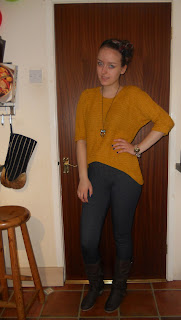 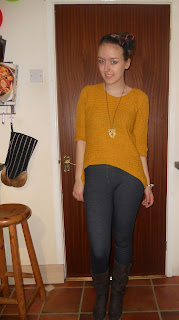