Hey Guys!
Not too long ago I went to a little evening do, that was a Jewellery party. It was a little like the Avon parties but this time the jewellery was laid out on the table and we could play about and try things on. I’ve been to the Host’s house before and she had a Shoe party, which was Totes amaze! Lots of Zandra Rhodes shoesies which were a dream! But like the Shoe Party, all the jewellery was super expensive. So it was more of a look and dream, for me and my Mum, than seriously consider what it would go with.
This is what I decided to wear. It was a gaggle of my Mum’s friends and then me. They know I’m into fashion and like to (over) dress pretty and look good. I didn’t want to over dress because I know that I always used to do that at the “Grown Up age of 13”, as I used to think. So I went for a smart/caj look. I would have loved to have worn heels, but I had been to London all day and my feet were tired! I think that the leopard print boots add a hint of quirkiness and makes the striking look more fun. Whenever I whip out the blazer I usually end up looking pretty formal. But the pairing of the leggings and blazer oozes the Smart/Casual vibe. The top is from Zara in an amazing £10 table sale! Because it is a knitted, woollen top the texture makes it appear more suitable for lougewear and relaxing, like a Christmas jumper is. The subtle juxtaposition of the blazer against the knit top makes for a toned down relaxed, but still want to be well presented appearance.
I would have gone for a few chunky rings and bracelets to spice up the look, accessories wise. But I wouldn’t have been able to try any of the jewellery on then! I think some dainty, single chain bracelets and perhaps a necklace would add an elegant visual to the outfit.
A messy bun, always says, “I didn’t want to look like I’ve tried hard, but I really have! At least I’ve hardly tried with my hair so I vaguely appear suitably dressed!”
Sometimes, I don’t even realise myself how much thought I put into one outfit! 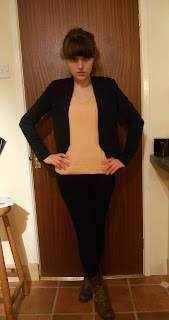 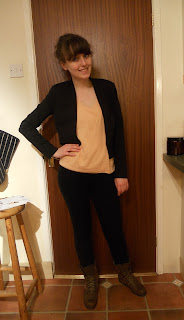 Hope you all had a very Merry Christmas!
Oodles and Toodles
Row Bow
x