Hey Guys!
This is a little work look I cooked up late last year. It’s a mix or smart, relaxed and tribal. Funky! I put together a little look similar to this, but much smarter in my Job Interview post here.
The base colours of the image are black and white. This fits in nicely with the monochrome trend which is sooo now! The accent colour is the purple in the print of the skirt. It makes the look brighter and happier, and I like a little fun in my outfits. I’m pretty chuffed with myself for finding the belt which I have incorporated into the look. It is a very wide belt which is elasticated around the back and has a large square buckle. I think that, although it visually chops my outfit in half and therefore me in half too, it some how elongated the look. Without the belt there is a large block of pale colours going on in the top and skirt. The belt breaks that black to create 2 separate blocks which are further apart from each other. Also the gap between the black belt and leggings is enough to remove the factor which would make me look short. The length of the skirt works well for this idea.
I have appeared to break the “No Black and Brown” rule. But, hey ho, I don’t think it looks too hideous with my brown boots in the outfit.
I put on a little pale red lippy to glam up the look which works nicely to break the black, white and purple trend I’ve got going on. I decided to wear my fringe to each side of my face, which doesn’t look so bad in the right image since it lays flatter on my face. But in the left image it looks a little round, making my forehead look pretty hench! Can’t win ’em all! 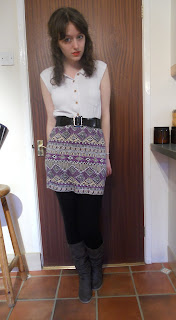 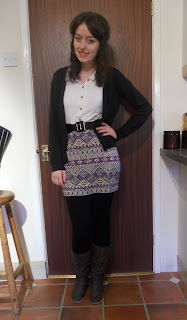