Hey Guys!
The final look from my busy weekend is this number. I have wanted to wear this dress out for ages, I’ve had it for literally YEARS and never worn it outside the house. I think a long bodycon-style maxi-dress looks really cool in Summer. The only thing is I’m not very good at stomach crunches (I know, shock horror!) so I don’t have the iron board stomach that you really need to pull off a dress like this. I’ve always thought saying stomach makes it sounds like a nice, toned set of abs, but I think tummy sounds a bit wobbly.

So to disguise this problem I added a few distraction so nobody could see any wobbly bits. Evidence A: Denim Shirt. The pale colour lifts the look and adding denim relaxes the look so you don’t appear too dressy. Wearing it open allows for it to move and not give you a defined silhouette, meaning nobody can be too sure where you end and the denim jacket begins… (It’s also the perfect length to go over my bum, since I haven’t found any non-VPL knickers yet. I’m feeling Spanx personally!) Evidence B: Long, thin, floaty scarf. The lightweight nature of the fabric adds movement so it isn’t always resting on your tummy and pointing to the big (but extremely yummy) dinner you had last night! The length is also almost like an optical illusion and it makes you appear taller. Evidence C: Apple Necklace. The trusty Apple Necklace is my secret weapon whenever I need to look a little taller and elongate my chest/torso. Against the scarf it gives the look a ‘tougher’ appearance. I mean that in the way that the Apple Necklace is heavier and made from metal & chain so the look isn’t overly floaty and airy, with the scarf and shirt. I feel it ‘anchors’ the look. 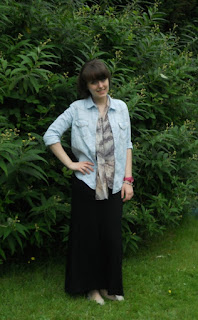 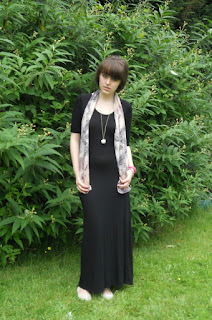 The denim shirt was in the sale (Ok Teen sale!) at New Look (the amount I’ve bought from there recently I sound obsessed) and so was a total barg. Therefore this look was funded my birthday money from Auntie Carey and Uncle David. Thank You.