Boy have I missed you guys! I’ve been detached from the internet for over a 2 weeks now and I feel totally disconnected from the blogging community. Quick refresher: I’m Row Bow and I love to blog about what I wear and when I wear it. I’m on twitter @rowbowk and bloglovin’. Phew! I hope you haven’t totally forgotten about me! The reason I have been removed from online sociality is that Row Bow has finally grown a pair of balls about moved out of her family home. Scary stuff, bet you never thought you’d see the day! But after staying at home for an extra year last year Mumma Bow finally decided enough was enough and I had to get my own life. I’ve not moved far, just to to start at . She can’t get rid of me that easily! But before I migrated to the capital I had an extra week at home after all my buds had moved back to their respective Universities. “What should I do with my time and make the most effective use of it?” I thought to myself. A massive cowinkydink was that the primary school I worked at over summer, wanted helpers for bread making on the Monday so I offered my services. I managed to get myself working the whole week there. Ya Boo!
I kept my first look very low key and simple because I didn’t know if I was going to be able to stay the whole week and wanted to look caj. I was only going to be bread making you have to remember. I think this colour pallet combo works really well, white, pink and yellow. I tucked the Barbie top into the skinny trousers to get a bloused effect with look really flattering if your tummy isn’t flat and all toned up, á la Row Bow. The brown belt add a nice bit of definition to the lose appearance to the top. My cardi is another purchase from Kylie from my summer haul. The trousers are actually Kylie also, a couple of seasons ago. 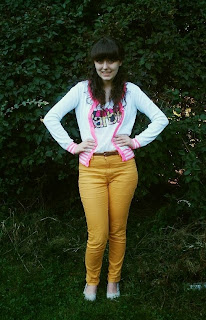 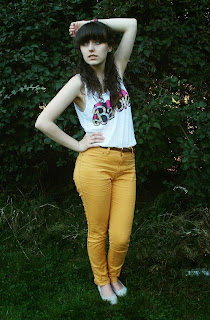 The bread? Well, we had 2 hours to get nearly 100 children to each make their own roll of bread. And of course they all wanted a go mixing and kneading the dough. We did cheat very slightly by using pre-made mixtures which you just add water to. I tried one at home without a food mixer and man that stuff gets messy!


I added a little black blazer, to experiment. And I kind of felt a little VickyB vibe going on with the bloused top and blazer. Not so much with the yellow trousers! 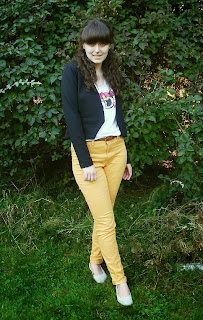