Hey Guys!
It’s that time of year, again, for the annual family holiday trip up North to see more of the Row Bow family. This involves a 7-8 hour drive, all in one go, from the bottom to the top of the country. Fun, Fun, Fun I hear you cry! I’m not gonna lie doesn’t come very high on the list of ‘Best Parts of the Holiday’. I fell asleep practically as soon as we set off, which I always find embarrassing since there’s a chance somebody I know will see my sleepy face drooling through the window, as we drive through local areas… Who am I kidding, I’m adorable when I sleep, HeHe!
I always think that a dress is the best attire for a long drive/travel. I always panic I’ll need a wee or feel sicky, so this way there’s nothing pressing on my little tummy to aggravate it. Also, it means you can keep well ventilated and nice and cool in an otherwise stuffy car. I wore this light cotton dress and cardigan. Although I was cooped up in the car for such a long time, I did have a half an hour slot mingling with the outside world so I decided to put some sort of effort into the look. I wore the white cardigan with the dress last time, see it here. I think it makes for a much lighter appearance, instead of a longer baggy black cardigan. Also, I much prefer the dress without tights since its so floarty and lightweight. I loosely wrapped a belt around the waist to give a new look to the dress. I’ll admit it, I’m not sure the trainers and bright pink socks go particularly well with the dress and rest of the look. However, they are good and sturdy for when you initially step out of the car, having been squished up for 4 hours, and need something steady to balance with. They support me well!
I decided to whip out the floral headband as I think the sublet tones are a nice way to infuse some colour into the look. I layered two golden pendant necklaces as I didn’t think one was clear enough to see. I have a Tinkerbelle one- from the actual Disneyland- and my Paper Crane Necklace on. The darker red lippy is a good accent colour to the predominantly monochrome pallett (if you don’t count the bright pink socks!) 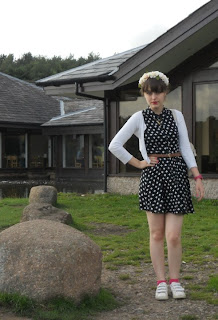 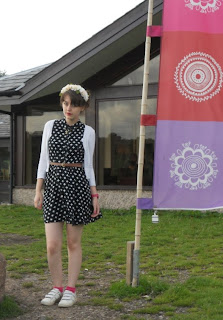 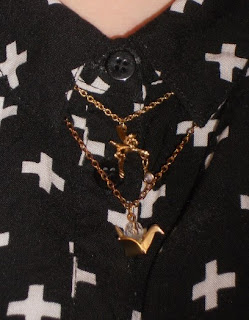 So I’m sure you’ll have heard the two new songd from two of the niggest musical superstars on the planet. If not, I’ll fill you in. Katy Perry has her song ‘Roar‘, which is about her bouncing back from her previous break-up and Lady Gaga has her new tune ‘Applause‘ which is about… Her? An applause? Lots of people have had their two pence worth and I thought I’d give you mine too. I much prefer K-Pez as an artist compared to Lady Gaga. I’m not a fan of the way Lady Gaga puts herself across as a work of art and claimed Applause was the song of the decade- when it defiantly isn’t anything that special. But, having said that, I do actually like Applause a little more than Roar. Roar is a great song, but Applause has the whole cheesy pop vibe going one, which is right up my street. One thing I’m not a fan of is I think she refers to herself as the Koons (the lyric video looks like it spells it this way) as in art in German but it’s actually spelt Kunst. I didn’t get my A in GCSE German for nothing! So could someone clear that up for me?