Hey Guys!So I was on line in a Que for some tickets yesterday, and I got bored. Here’s the outcome! 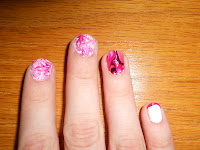 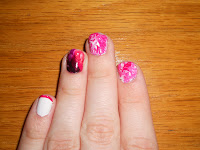 I have tried out a couple of marbling effects on my nails. On my ring finger I tried water marbling and on the other two I chose dry marbling, I suppose.

Water Marbling: To get this design, used a small yogurt pot filled with mid-temp water. I then poured small dots of 3 colours of nail varnish in to the pot. Then I used a cocktail stick to swirl the colours around and create a pretty pattern. Then I dipped my nail into the water where there was no nail varnish. I scooped my nail through the patch of design I wanted to wear and proceeded to lift my nail out of the water. This does get all over your fingers and is very messy! This is the reason I chose a yogurt pot and I could simply bin it once i was finished and the cocktail stick can be wiped with some kitchen roll, then used again. I chose dark purple, bright pink and coral in colours. It can be quite a waste of nail varnish to get one nail completed. So I recommend you buy yourself some cheap colours which are specially for marbling. Sometimes which the nail varnish drops into the water it runs, and spreads into a large circle. I found it worked better if i put the other colours on top and inside of this circle as it all attached together better.

Dry Marbling: I don’t really know the actual name for this. First you apply a base coat with one of the colours you are going to use. I chose white and a bright pink. Then I applied the white as a drop in the middle of my nail. I then applied a dot of the bright pink on top of the, still wet, white dot. So that i didn’t contaminate the pink with white, i scrapped the pink onto a cocktail stick and put it onto my nail with that. I then swirled the colours around and together with the cocktail stick. I tried so smear the colour to the edge of the nail to create a full nail design. Be careful not to swirl too much as you will just end up mixing the two colours together completely. Try with as many colours as you like!

Obviously apply a top coat. These were only painted yesterday, but already the have begun to chip. I think that this is because the layers all together are so think, so make sure to apply a new top coat everyday. Apply the top coat around the top of the nail so it seals the varnish from front to back.