Hey Guys!
As I mentioned in my Top Tunes Tuesday post, I started University this week! Exciting times, but I’m not actually doing a degree course so nobody believes I’m at Uni. I’m doing an Art Foundation so hopefully somewhere might actually take me next year!
This wasn’t actually my first 1st day outfit, but one of my newbie friends said it was a pretty outfit so I thought I’d show you. This is the third outfit I’ve posted with this jumper, and it just shows you how versatile one piece can be. I have layerd it with a cotton blouse this time. I only had the collar from the white top on show, which created more of an interesting neck line. The white blouse has gold buttons down the front, and since I have buttoned it up to the top, one is visible peeking out at the top. Because of the golden buttons, I have gone for a golden head band. It’s one of the gladiator style ones, with two strips of golden plaits. I don’t think that they really suit my face when I wear them across my forehead, so I prefer wearing them as a normal Alice band and slightly splitting up the plaits. I have totally neglected any sort of jewellery this week, just after getting good at accessorising, but as the outfit is predominantly yellow and had golden bits, I would have gone for golden chained and banded pieces. I’ve just paired the tops with a pair of black leggings (which my purple warm leggings underneath) and grey boots. You can just see my bright pink socks peeping out of from the top of the boots keeping my tosies toasty, cheeky!
I liked this outfit so much that I wore this outfit to work on Saturday as well. I wore my hair differently, I had a bit-up-and-a-bit-down do going on. I also remembered to grab a necklace this time. A significant highstreet trend includes crosses and collars, so I’ve teamed the two together by choosing this cross necklace. However, I’ve just realised that the chain for the necklace I chose was actually silver. But because I have hidden the chisn underneath the collar it’s not so noticeable. But the top button is still seen, so I had a small clash going on. Oops! 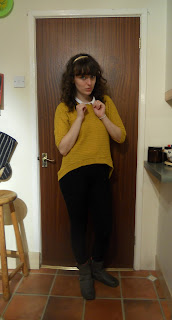 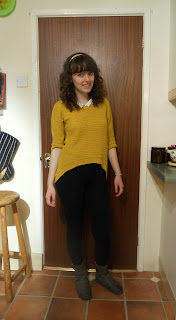