He, He, He! I’m so witty with today’s title. I bet nobody’s written that before. Obviously today’s post is a selection of Hot Picks from Hot Topic. I basically just went straight to the Disney section and decided I wanted all of it! But I have limited myself to only 9 tops. I have been so close to buying myself all of them several times, but the international postage always puts me off. Sad Times! 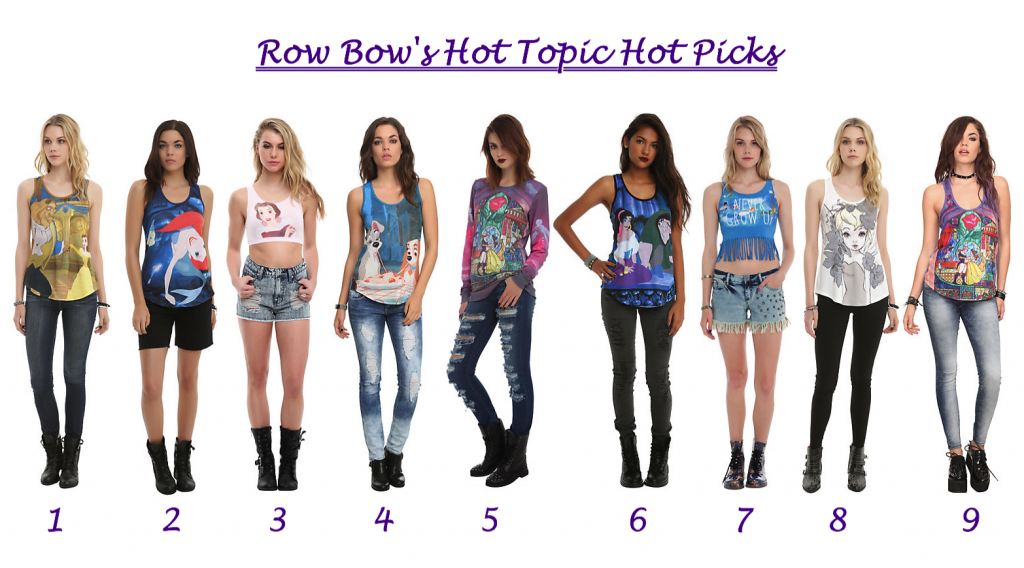 1- Belle is my favourite Disney Princess, so it would make sense that she makes a few appearances on this Disney list. This is an image from a happier time in the film, where Belle dances with the Beast in a beautiful yellow ball gown in the castle’s grand ball room.
2- ‘Up where they walk, Up where they run, Up where they stay all day in the suuuun!” I can just picture Ariel singing those magical lines as she swirls up towards the light. Man I love that song, and I love this top!
3- Although the original film is top of my list, my favourite look for Belle comes from her Enchanted Christmas tale. I love the red snow-coat with the fluffy hood. It’s practically pink, which is probably why I identify with it the most, hehe!
4- Without meaning to sound to art-critic-y, I think that this film still actually sits really nicely on the top. It doesn’t appear awkward, which some versions of these tops do. Also it’s one of the cutest moments in a Disney film, ever!
5- I really like the warm, reddy/purple colours of this jumper. The image is of the Stained Glass window from Beauty and the Beast. It even has the glass-encased rose on the sleeves and back.
6- I’ve always thought Esmerelda was one of the sassiest Disney gals, along with Megara. But this print shows a softer, caring side as she helps Quasimodo.
7- Scrawled with ‘Never Grow Up’ and the characters from Peter Pan, this sweet little crop top makes use of added fringe detail reminiscent of the lost boys fun and games.
8-Quite different from the previous tops, this vest top has an almost grey scale illustration of Tinker Bell. It’s a more grown up way to wear Disney.
9- This print is actually the same as number 5 but it’s on a vest top instead. I’d happily accept both versions.
What do you think of my Disney Picks? Which Disney moment would flaunt on a top?