These nails are done with ‘Primark Beauty: Nail Wraps’ in a lovely black floral design. The florarls and bang on for summer, but the black reflects the miserable weather of late. They do come with their own very simple instructions. However, I thought other would benefit from some imagery are they are tricky to get the right size. I had to stray into the toe nail sizes for my thumbs. I knew I had reasonably large nails but these wraps make me feel like Mrs. Sausage Fingers! At first I eyed the strips up against my fingers and thought they’d fit. But the smallest size for the pinky fingers only covered just over half my nail! #embarrassing! 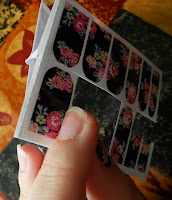 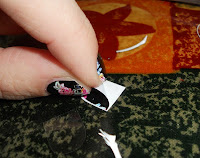 So I decided to proceed lining up the wraps against my nail and rolling my nail over them to see how much it would cover/need to cut off. Once I’d cut it to the right shape, roughly, I could peel it off and place it on. They’re not like foil wraps where you rub on and peel the backing off. These are more like stickers, which I’m not too keen on. 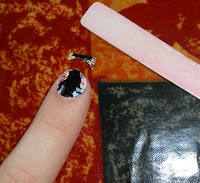 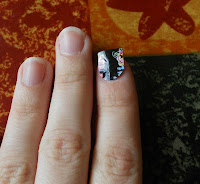 Press on in the centre and work outwards, so remove any lumps or bumps. The nifty thing is that you just need a nail file to ‘cut’ off the excess. Cut them a little taller than necessary to you can file to the correct shape. 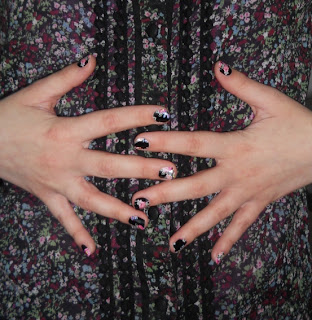 I understand that as a Primark Beauty product I shouldn’t be expecting the best quality. At first I really wasn’t too sure on them. They felt flimsy and as if any little catch would peel them off. I applied a top coat along the tops to see them, since some of the wraps ripped if I filed at the wrong angle. But I don’t know if that’s really had any effect. The big thing I AM surprised by is that they have even lasted a vigorous hair washing which is impressive. I was really worried that I was going to end up with stickers in my hair (which to me would have been the ult ‘mare!-ultimate night mare). But I think that I only lost the very top of one index finger and the rest lasted.
Considering I’ve had them since Monday and they’ve lasted a hair wash- which is the hurdle most of my nail polishes fall at- I’m actually pretty impressed. Lucky for me, since I bought camouflage colours and a tack-tastic pink and golden leopard print. Also, applying them kept me occupied for half an hour or so. I’m looking for anything to entertain me now…
I couldn’t go without letting you in a on a new tune alert! Lawson have a new song with B.o.B called Brokenhearted. However, upon first listen the lyrics are really predictable which I don’t really like in a new song. I was to be dazzled my lyrical geniuses. The track is alot more guitary and sound more aggressive that the lovey dovey singles from Chapman Square. Since this is the first single to be lifted from their new album, perhaps we’re looking into an edgier future for Lawson.
Oodles and Toodles
Row Bow
x