Hey Guys!
You wouldn’t believe it, but it was actually raining when I took these photos. But I’m on such a roll with all this posting that I couldn’t give up on you that easily!
I’ve only worn these shoesies once since I got them, and that was back in my Werkin’ post. I adore them and I can’t even tell I have heels on when I walk in them. I teamed them with my floral dress which actually matches my nail tutorial I posted yesters. I think that the clash of the two patterns actually works well and is muted with the block colour of the jacket. Even thought it was most definitely not sunny when I wore this I wasn’t going to be brought down so I put on my denim jacket and braced the temperature. (I was inside most of the day so it wasn’t too bad).
I’m not sure if you can tell but I did something a little different with my hair for this look. I feel it’s more noticeable in the 2nd of the two images. After I washed it the night before I put my hair in two twisted plaits and slept in them. Like you used to do when you were 12, I do when I’m 18. But with snazzier plaits.
Quick walk through:
1. For 2 plaits, split your hair into 2 halves.
2. Split the left section into 2 further halves and separately twist each half clockwise.
3. Twist these 2 little twists together in the opposite direction, so anti-clockwise, to make one big twist.
4. Tie off and repeat with other side.

I was aiming for beachy waves, but I felt the outcome of these twists with my thick, curly hair was a little dread-lock-esque. Wearing it through the week it has separated further and achieve beachy-ness more so. But I think the regular plaits are the way forward for beachy mermaid waves.
As I’m sure you’re all very aware that Demi Lovato’s new album DEMI is out now (But not here, May 20th I think). There is only one collab and it’s with Ms. Cher lloyd. I have to say I thought they’d have equal singing parts, but Cher just jumps in for the middle 8 with some singing and a quick rap- which I have nailed already! Really Don’t Care is a pretty funky tune with a really catchy chorus. Best of all I’ve got my little sister hooked. ‘Holla, 2 Lovatics in the house!’ 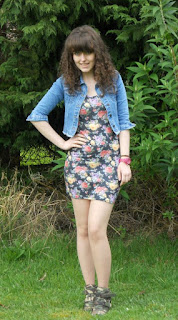