Hey Guys!
This is what is wore to the exhibition of my work (which was the same evening I began my modelling career!). The photo was taken next to a picture of my Final Major project outcome. Having spent the whole year being told not to model my own things, as ‘I won’t be able to see what I look like on the camera and therefore wouldn’t be in control of the shoot’ (did she not realised I had legs to walk over to the camera?). My tutor told me to make lots of self portraits  of myself as the singer I was designing for. I chose Kyla La Grange and spent my time researching her and her style and music and themes she sings about. Then I made some designs. That sound simple enough but it was super stressful and would never wish it upon anyone! But at least I should be going to Uni I actually want to go to for a degree I actually want to do in September.
It was cold, rainy and in the evening so I decided to layer up. Just as I stepped of the train to start the 15 minutes walk from the station to Uni, the heavens opened and my beautifully straight fringe was attacked. But I think I saved it, ish. I put a white lightweight shirt underneath the vivid yellow dress more as an additional layer but to also give the neck line more interest through the addition of a collar. I think it is a unique combination. As much as I love the dress it is wee bit short for me now, hence the leggings. I always try to add a belt where possibly to add more shape & enhance my figure, which works well with the skater style skirt.
On my feet I wore my leopard print boots, as the tones match the belt and I didn’t want too much black. Brown is a lighter tone and lift the look more than black shoes would.
I really like Ke$ha’s –Crazy Kids with Will.i.am (my bezzie). I’ll admit that the whispering bits are pretty creepy and I’m not sure I’ll ever get used to it. In the 1st half of the video Ke$ha is gansta-licious. But after Will’s interlude she appears far more glamorous wearing a chained corset which looks like a creation of The Blonds- but I haven’t looked into that yet. #lovetheirstuff 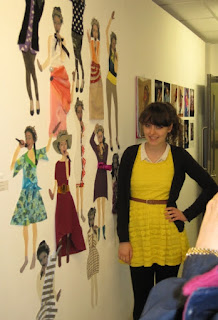