Hey Guys!
I’ve final reached the end of a very busy and tiring week. But it was super fun, pros and cons and all! This was my razzmatazz outfit to round off a week of hard work to look presentable every day. I’ll admit I let my guard down on Friday, but it was still a well coordinated look.
This was the second barg that I picked up from the Kylie sale. Its an all-in-one play-suit, top and shorts. Disappointingly, I will admit that my cutie of a booty is not the same size as a 13 year-olds any more. So that makes whipping it on and off more of a tactical process that takes some planning. The top is made of chiffon, which at seams is easily worn and holes in these style of tops are common.  When I tried on the piece I noticed the hole. When I went to the till to buy it I told them about the damage and I got a 10% discount. Result! You’ll find that if you buy any damaged goods and tell them about it at the till, you’ll get at least 10% off. This is great for super scrimpers like me, especially if you can fix the problem super easily yourself- which I did. I’m a dab hand with the old sewing machine don’t cha’ you know!
I kept the colours very simple and mainly used the black to build the rest of my outfit from. Apart from the dark purple and blue head band, which I put in because it looks pretty! I don’t really have a black bow in the same size, and I only wanted a little something to juzz it up a little. The red lippy was a panic decision as I left the house. Because I was soo annoyed that i forgot the lippy yesters, I chose to pick up a selection to take with me today. I ruled out the deep purple as it was a little OTT for the look. The pale pink was a little shimmery for my fancy that day, so it had to be the pale red.
I pinned up my hair at the back to create a more pronounced top to my pony tail, but it appears to have deflated. With my lushus long hair now, creating volume and keeping it neat is a lot easier.
Shaz-am! 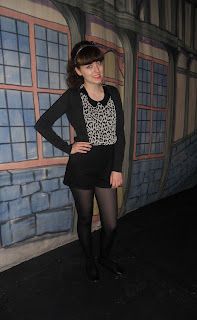 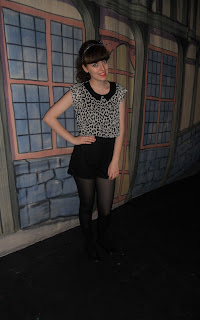