Hey Guys!
Yesterday was my End of Show Exhibition and the Fashion and Textile pathway had a little fashion show. I modelled a pair of harem style trousers which I made back in November. I am super proud of these beauts, so (c) to Row Bow! I’m not gona lie, there were lots of ‘Ooohs’ and ‘Ahhs’ when I stepped out. My classmates all think that they look so profesh, and my Mumma said the ladies behind her seat said ‘Oooh, if they were in the highstreet, I’d buy them!’
I strightened my fringe before I left for the 2 hour trek to Uni. But as soon as I got off the train and started walking to Uni the heavens opened! Such a waste in my effort. Put it just went more poofy, than curly. In my official images I have super long, sleek, stright hair. But I left it curly for the show as it was only a 30 second strut. I went for a tribal vibe, hence the wooden/stone accessories. Sounds gross, but I made a bejewelled chicken bone tiara for my final project. I kind of wish I’d have worn that as that IS fancy.
Man, I had so much fun doing my thang! We did 2 group walks at the end, after solo walks. And I’m not gonna lie, I worked it everytime, hehe! Unfortuntley one girl’s third and final look, which appaz was her best, didn’t get to go out as it was such a rush. Sad Times! 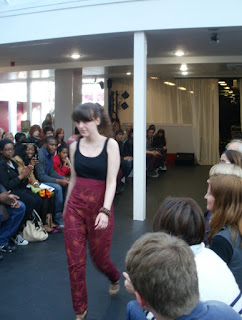 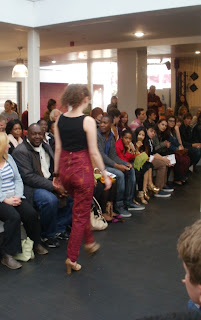