Hey Guys!
This was the bigg’un. The mammoth shopping trip that I had been psyching myself up for all week. The glorious trip to Livingston Shopping Centre! Dun, Dun, Duuun! It had not one, but at least 2 humongous shopping centres. Better yet one is a huge designer outlet, meaning everything is really cheap and massively discounted. Then the other is a mahoosive shopping centre which always has big sales on since we holiday around the time the schools there go back. In the outlet I try to make a start on my Christmas shopping, but I wasn’t to inspired so I just bought a few essentials for me. £15 for 3 quality M&S bras, not bad. I go for quality and longevity with my bras, so M&S is the only place for this gal to go. I feel a fraud going to Bravissimo, I can’t contend with their customers. I was far more successful in the regular shopping centre, sensibly named ‘the centre’. I never usually shop in GAP, but I found a soft basic white long sleeved top, with navy stripes. Very Nautical. I also popped into a shoe shop with some crazy sizes going on because I ended up getting a pair of size 5 trainers. I couldn’t even get my tiny feet in the size 3. Only have I ever done that before in the kids section of Primark! They are the coolest trainers though! White, with silver bits and sparkles and the top part over the toes is covered in spikes. I’m sooo gangsta! Finally we found the holy grail that be Primark. I wondered in and found immediately found the sale rail. I’ve realised my route around any shop is determined my the layout of the sale rails. I’m like a magnet to those bad boys! I instantly fell in love with a beautiful watercolour flower print summer dress. But put it back as it was very girly, and thought I should be looking for ‘cool’ things to fit in at Uni. Once we’d delved into the deepest depths of Primark, i.e the tills I was super miffed that I hadn’t found anything I was madly in love with. Mumma Bow suggested that nothing would make me happier than buying that dress and sent me back to the top of the store to get it. She knows me so well and was totally right. Once I had my pretty girly dress in my hands I was picking up allsorts. Including 2 pairs of the same sunglasses, one in purple + one in green (50p each #winning) and a pack of lovely hair slides. And that was my shopping trip complete. I defo shopped ’til I dropped. Struggled to stay awake thought dinner. It was Chinese as well, but I just couldn’t keep my eyes open!

My outfit is pretty standard, but check out my new cardigan. Where is it form I hear you ask? Kylie at M&Co of course. Would it be from anywhere else? I love the neck line on it, how it curves quite low and frames around my hair. It’s also pretty thick to good for winter, since it has two colours running through it. The little nautical boats are so sweet, and the bolder blue brings a modern twist to the S/S nautical trend. 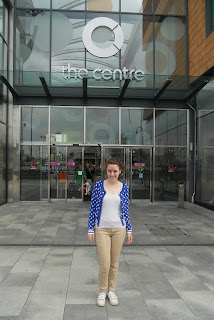 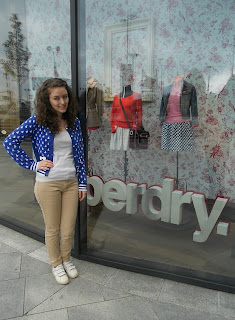 BIG MUSIC NEWS! Conor Maynard has dropped is stonker of a tune, R U Crazy? Now I’ll be the first to admit I HATE when people use R instead of are and U for you, obvz. I feel disgusting when I have to do it in tweets. So instantly I wasn’t too interested when Conor started causing a little bit of a frenzy by tweeting it, hashtaging it, making people take note of the phrase. But now that the video is released, woah, well I won’t ever complain if Conor uses the annoying grammar any more! The song starts a little jazzy, reminiscent of will.i.am’s Bang Bang. And in the video he wears a relaxed suit, with just the waistcoat and the bow tie undone. Obvz, he has other clothes on but just not the whole tux sha-bangs. Then it takes a dancey, dubsteppy (?) vibe. He gets a little Mandem G on us and it’s instantly clear how he’s matures musically (and physically I’ll add!). The lyrics are really simple and each verse is basically the same. But they are so catchy and easy to learn. The track is with Labrinth and his influences are really clear. I like the effects he puts on the smoking bit and after that. He even pops on the track for a few little words of his own.
Warning: For the middle-8 -is it still called that?- in the video things get a little ‘cover you eyes kids’ and easily-jealous-girls/OMG-Conor-is-mine-and-I-ain’t -eva-gonna-let-anyone-get-there-(h)’ands-on-(h)’im kinda girls should look away. But I just think he looks super hot. I like the styling in the corridor shots. It’s only been like 8 months since the last vid, but I just can’t get over how now he actually looks nearly 21.  You won’t catch me doing that, I’ll be wearing Kids clothes 4 lyf mate, hehe!

Oops, that was a bit of a tangent. But what a beautifully long post to make up for the lack yesters.