Hey Guys,
This is an outfit which I wore to an interview at Oxford Brookes.
The dress reminds me of a 1940’s housewife due to the shape. Little bit of history for you: around that kind of time there were rations due to the war, and this was even applicable to fabrics in garment making. Housewives tried to use as little material as possible, but keeping their modesty obviously! In the 1950’s the skirts became fuller as restrictions were less so.
The polka dot pattern is great if you’re not big on prints and patterns, like me. It isn’t too loud so the look becomes classic but fun. There are also little capped sleeves on the dress, which add a bit of shape and interest.
I teamed this outfit with a bolder pink cardigan as it brings it up to date with a little colour blocking. I also added a belt around the waist to give more shape to the figure as the dress has a very straight down silhouette. It also makes the bottom of the dress appear a little fuller in comparison. The belt could be worn over the cardigan and this wouldn’t create such definition around the waist. I have little black heels, but unfortunatley they have sunk into the ground in the photos! I didn’t want to wear too big a heel as it wouldn’t have gone with the 40’s look.
Cheeky: This dress is actually the largest size from a childern’s/teenage range of clothes. You should have a look in those parts of the shop sometimes as you’d be surprised at how big some 13 year old pieces are. They’re also much cheaper and usually tick the boxes of current trends.
I hope the photos don’t look too dark, it was a miserable day outisde! 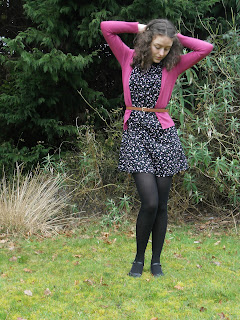 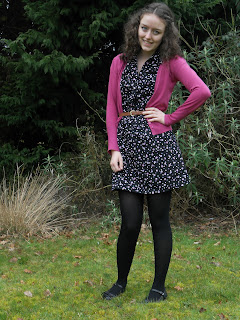