Compared to the previous performance look, this one is much more tone down. I dare say it looks a little ladylike actually. More crazy lighting and picture quality to follow. You love it really!

The look is super simple really, but it is the first actual outing for the beautiful mint lace skirt I’m sporting. I wore it here but I didn’t actually get to parade this about anywhere, since the heavens opened on that day. The skirt is in a medium so it sits a little lower than my skirts usually do. I’m a fan of waisted and high-waisted skirts, if you hadn’t noticed! However, I do like the way that because this one rest lower down it does elongate my figure slightly. The body-con, navy dress that I’m wearing as a top underneath clings, so flatters my top half. But because the contrast in colour occurs lower down than my waist it makes me look ever so slightly taller. I kept the navy colour for my jacket because I think black tights and a black card would have appeared too dark. Also the cropped length of the cardi looks nicer than the looser fitting black cardigan.

I couldn’t be totally classy and elegant, I had to get some bling twinkling in my look. The necklace I have chosen reflects the blue and white tones of the light, which goes with the colour pallet of my clothes. My lovely neighbour, who is very excited by my interest and studies in Fashion, kindly gave me a Calvin Klein lipstick around christmas. It is super lush and I’m wearing the subtle reddish-rose tone in these pictures. I’ve also got on the Nails Ine Matte Nail Polish that she gave me too, the lippy and polish were meant as a pair but she didn’t like either= Row begin quids in! I have a little review about the nail polish coming soon. #spoilers 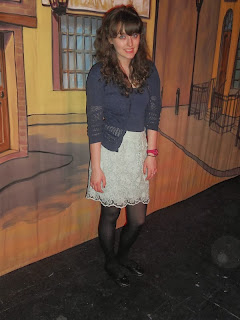 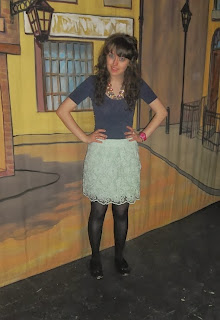 Ella Henderson is my new fave babe. There’s no question she is beautiful and has the voice of an angel. I’m pretty such when I sing in the shower I sound exactly the same! I love her slowed down version of Cher’s Believe. She gives it a real meaning rather than just dancey dance time. And her own original songs Five Tattoos, Waiting and Missed are pretty spectacular too. I’m sure we were made to be buddies!