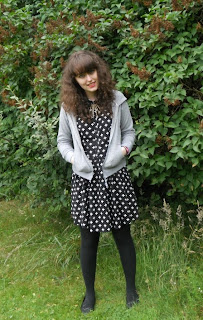 New dress alert! I popped into town at the weekend and H&M had a massive sale on up stairs AND down stairs. When I went in with my buddies a couple of weeks ago and saw some lovely purple palm tree printed trousers but I was talking to them and only really half paying attention to the clothes. But after I go home and I was thinking about it during the week I decided that I actually did want the trousers and I dragged my Mumma back into town at the next available free slot in my diary. But when I got there and found them again it turns out I had been picturing them initially wrong and I didn’t really want them in fact. But I had a bit of a mooch around and tried on a few other pieces and this is one of the purchases I made. I love the cut of the dress! The combination of this and the lightweight fabric of the dress means it sits really nicely and flatters creating a dainty frame. I didn’t realize when I bought it but another feature I like is low cut arm holes. They’re cut a little lower than a regular one, which means the chest to collar part appears thinner and longer, which has a wonderful effect on your figure!
It was really a hoodie day since it was a bit breezy, but I think the dress looks a lot cooler without anything. Or a white cardi works well too.
I teamed the dress and black tights with my golden spiked necklace. I also added a couple of gold and purple rings on my index and middles fingers. I never used to wear rings on my index finger, but now I think it looks rather interesting. Also, since I have to buy large fingers as mine are deceivingly wide boned sometimes when I get home they feel a little loose on my ring finger to I shuffle them across where they fit all snug. 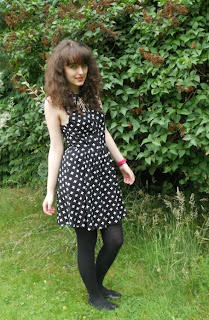 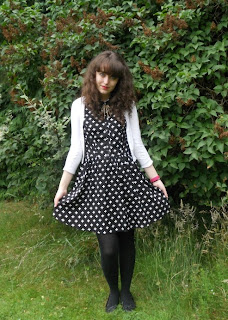