This was the end of my first week working at Style, I’d had so much fun and learnt so much already. I still had 4 more days but I defo felt like I was fitting in nicely! I had managed to plan my placement very tactfully as today there was a MASSIVE Beauty Cupboard clear out and that meant there was a chance to nab some of the latest products that had just been released. As I’d been organising and popping products away all week, I was super excited to finally have the chance to be able to get my hands on some things. So as we started to set up I was on trolly duty, attempting (and sometimes failing, but sometimes winning) to manoeuvre this giant wheeled, railed container to transport products and bags from one end of the office all the way to the other side of the floor. I’m not gonna lie I thought it was going to be quite a dignified affair, but woah, how wrong was I? Even when we were still setting up the hoards of eager journalists were dribbling whilst peering through the glass walls. Eyes wide, they could smell their pray (the beauty essentials) as we filled a boardroom table and they worked out the best tactic to hunt down the prized products. But because little Row was the one moving everything here there and every where I had like 30 seconds to peruse the table of goodies to find whatever I fancied before the masses were let in. One lady who was helping set up had a whole bag bursting with treats before I’d even finished wheeling everything in! But I’m sure it was a benefit to myself as I already have a lot of products and I didn’t really need anymore lipsticks or nail polishes. However, that didn’t stop me from weaving in and out and around the table as the gannets used their arms as excavators collecting as much treasure as they could and stuffing it into goody bags.

Anyway, I’ll give you a little lo-down on what I wore for this momentous occasion. The look started with the polka-dot midi-dress. But it was a little chilly, as it always is in England, so I added the long sleeved top and black tights. Sometimes I add tights to these body con dresses to make me feel like my gut is held in a little better. Mmmm, yummy! Fun Fact: The purple long sleeved top is actually a crop top so it kept my arms warm but meant I didn’t totally overheat, nifty. I accessorised with a little pearl necklace and a grand floral crown. I painted my lips in what I would normally call my deep purple lipstick, but I’ve come to the conclusion that up close it isn’t really that purple. It’s more like a deep, rich red. Like red wine. But that’s no problem now because I managed to save a proper purple lip crayon from the goody table at the beauty sale, so I now really do have a purple lipstick!

Massive apologies for the super blur on these images. I would say its’ a new look, but that’s the worst lie ever! 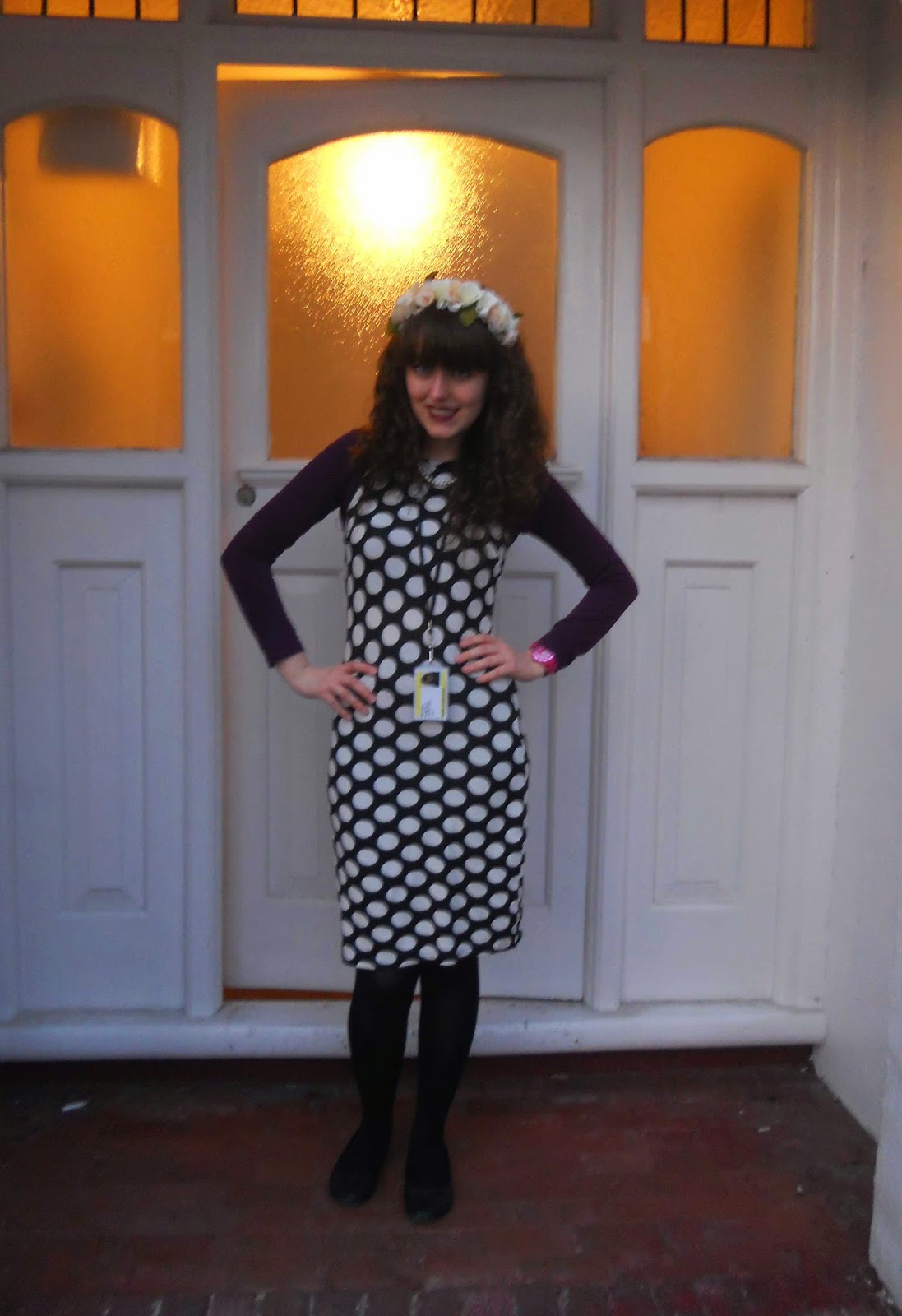 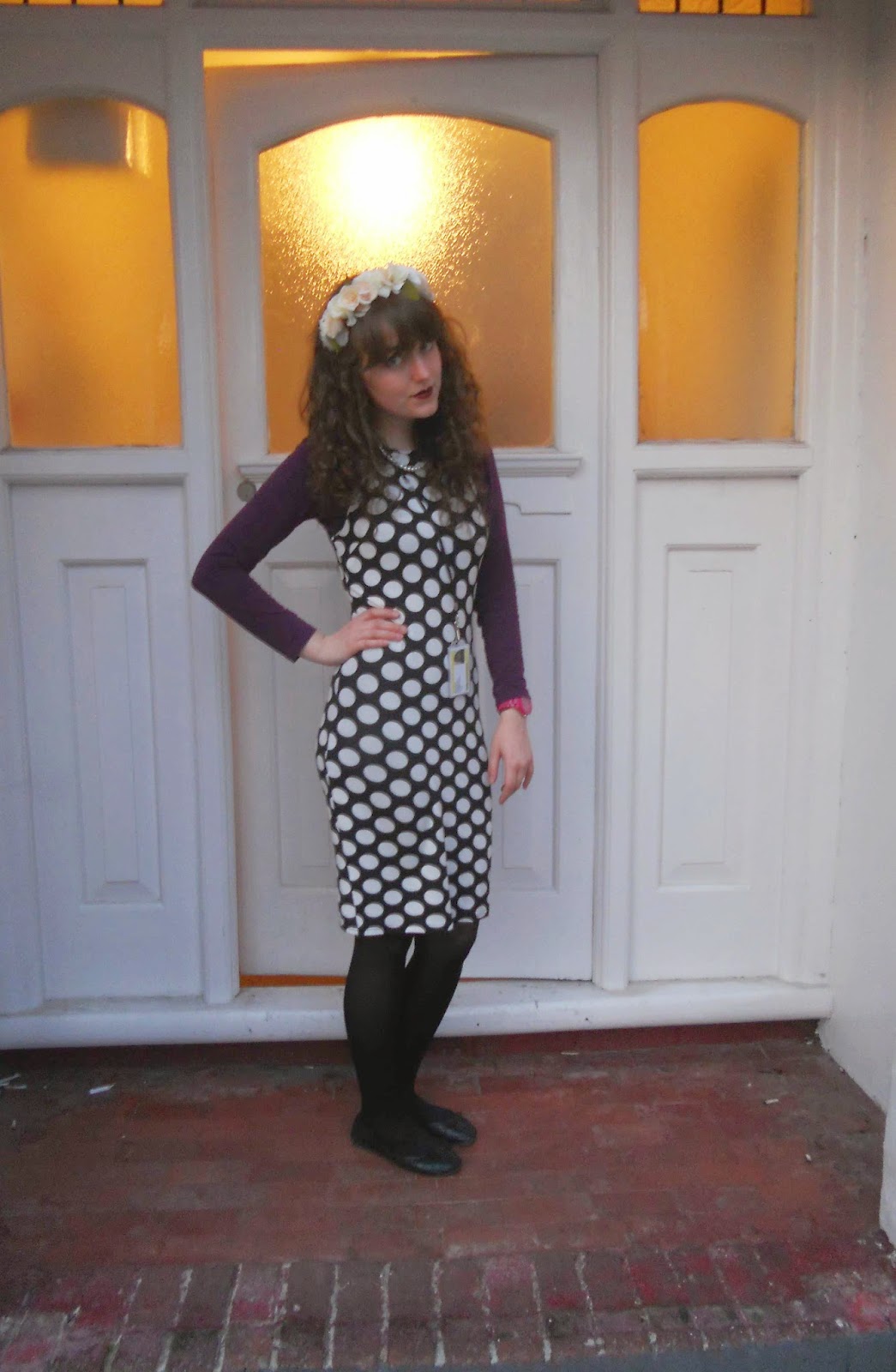 Since little bits and bobs from Ella Henderson had been popping up here and there, I’ve defo rediscovered my love for her. I’ve mentioned her before when we had 5 Tattoos, Waiting, Missed and of course her beautiful X Factor cover of Cher’s Believe. But now we FINALLY have her debut single, Ghost, and I love, love, love it. The lyrics remind me of Kyla La Grange, when she’s like ‘I go, down to the river to pray’. I like that it’s not really cheesy, but Ella is a true artist so we were never going to expect that really were we? In the video she has matured so much. Totally removed from the sweet 16 year-old we saw on the X Factor. Gone is the chunky eyeliner flicks, she’s a white-oversized-shirt-adorned-siren now. #WatchOut!