Hey Guys!
Even though we’ve been in this beautiful blogging relationship for coming up 18months, I have never attended a Bloggers Event. I’m not usually one for gatherings with people I don’t know since it tends to bring the trademark Row Bow Panics. But I manned up last night (by manned up I mean dragged a willing friend) and toddled off into London to go to my first event. I defo meant to network waaay more, but I was quite content soaking it all in. After the shindig, I was having a peruse of Twitter and found lots of famous faces were there but I had no idea! Clueless! Kitty Brucknell was there and she came and asked my and my buddy about the lady who was doing our nails, and I thought she looked like Kitty but didn’t think she’d turn up. She’s actually quite petit in real life. A waist to die for! Jasmin and her pal from TOWIE were there, but I don’t watch it so ma bud told me. Jade Ellis also from X Factor and I’m dead sure Nikki Graham was there. I think that’s enough name dropping more about what was there… 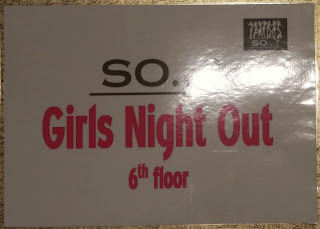 The party was to promote So… Sexy?, So…?’s new fragrance, and their new Dry Shampoo range. They had a table of fragrances to try and then you could try to win a snazzy bag by saying which was your favourite. We liked So…? Sensual. There were little cute cupcakes dotted around, which all looked amazing. And they even had Sweetie trees! I think I need several of those at home for personal consumption, hehe! 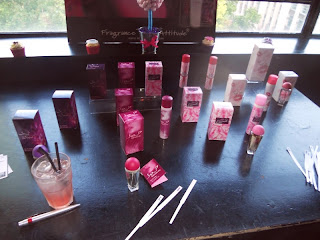 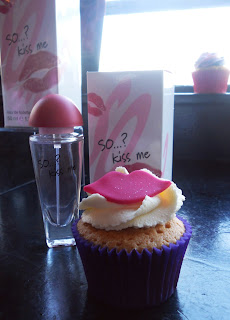 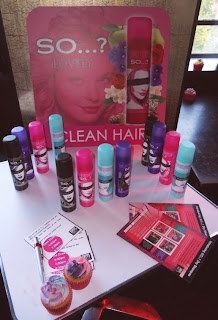 I decided to wear my new dress from Primark. For £13 at full price, I thought it was  total barg! It’s a skater style dress, which means the skirt is kind of in a fit and flare shape. It sits really nicely as it skims over my derriere and hangs down loosely. It has short cap sleeves which are faux-leather. If it was real leather I think it would be thinker, but its only Primark so I expect its a plastic. The colour of the dress calls itself Raspberry and I think it’s gorgeous. There was another one in a grey textured pattern, but this pinky/berry colour is far more Row Bow! The actual belt that comes with it is very skinny and shiny. I swapped belts and wore a slim, but not too skinny belt. This one is slightly textured and matte which I prefer to the little plastic ones. I teamed the dress with opaque black thighs and black dolly shoes. I would have worn heels, but they didn’t fit in my bag! 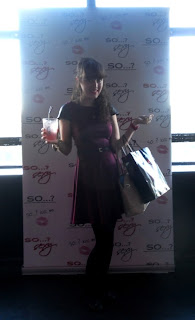 As my belt had a golden buckle, I chose golden jewellery to co-ordinate with my look. I couldn’t really decide if I wanted to wear a necklace, so I went for my dainty paper crane necklace. A really chunky golden chain necklace would also work really well. It would make a tougher look to go with the leather sleeves. As well as my pink watch, I wore a black and golden charm bracelet from Accessorize and 2 little golden rings. 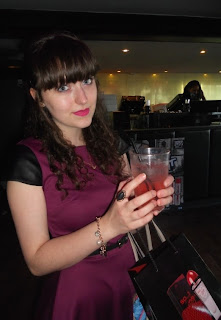 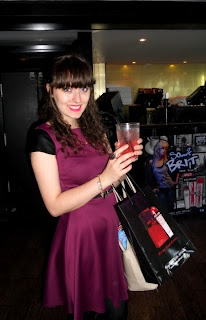 For my make-up I wanted to try out pink/berry and black eyes. But as it was not working how I anticipated it would, I thought, ‘Just stick to what you know babes!’ and went with purple eye shadows. A slick of my BarryM bright pink lippy and I was all dolled up!

I had such a nice time and it was a great event for me to attend as my first bloggers event. I did have a little natter with another blogger DarlingSophie, so check her out. Expect to see possible parts 2 and 3 with the nails I had done and the treasures from my goodie bags.
Oodles and Toodles
Row Bow
x