Hey Guys!
I wanted a big baggy t-shirt that I could look cool in by rolling up the sleeves. I knew I had some spares around the house, having bought them with the intention to snazz them up. Luckily I didn’t because I think the white baggy tee in this looks pretty reem!
The t-shirt is a small men’s so it is nice and baggy. I got a 2 pack from Tesco Value for £3, but that was yonks ago. But I’m sure you can still get them really cheaply. This look would look good with one of those slogan tops with “Geek” or “Nerd” on. I don’t really like those as you see many people with that on and I can tell they most defiantly have never been a ‘Geek’ or ‘Nerd’. I have been/still am so I would easily get away with it! Just don’t get ‘Dork’, whatever you do and it means something entirely different to what you think it does! I don’t know if that’s just in England or generally everywhere…
I wore this look to work and I most defiantly flashed to a couple of 7 year olds, they were giggling after I bent over. Unless they were telling jokes, but they were meant to be singing so perhaps not… I didn’t even bend over that much, as I knew it was a little short with the heels. I really want some of the lace trimmed cycling shorts that Little Mix were fans of this time last year. Then I’d be safe!
I think that the cornmeal colouring of the socks actually works better that a pair of bright white socks, as they blend better with my actual leg colour. By wearing the socks with the hoes it gives a more school-girly vibe.
The cardigan is a new buy from the kids section sale in New Look. You’d be surprised how big 14 year old clothes are. It fits really well and still has that baggy look to it. The best thing is that none of my friend’s will have the same cardigan as they don’t venture into the kids section. Worth a look! It matches really well with my heeled brogues, which I love as they have a chunky heel.
I did initially wear a ‘Gypsy’ red lipstick- Tesco again (!), but I forgot to re-apply before I took these piccys. Criminal! All the little (and big) kiddies loved my heart shaped sun glassed
I LOVE Demi Lovato’s new album, DEMI! I have at least 5 fave songs! Got it on REPEAT atm- so soon I’m sure everyone in my house will adore it too! I have Something That We’re Not, Fire Starter, Really Don’t Care -which I mentioned previously, Nightingale and Neon Lights on loop.
Do you like my purple flowers? 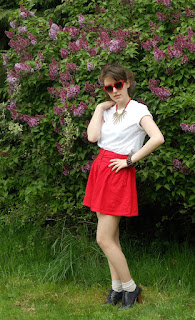 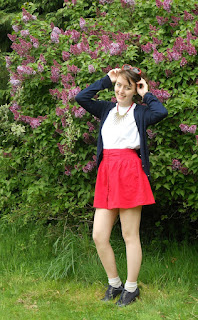