Hey Guys!
It was time for a bit of culture (or Cult-cha as me Mammy say). I went to an art galley in the city which had a couple of interesting exhibitions on. The first one we went to go see was ‘Coming into Fashion : A Century of Photography at Condé Nast’. It was a gallery of lots of images from different publications that are part of the Condé Nast group. Mainly various editions of Vogue. Some of the images were really interesting as they dated all the way back to 1913, so I saw some of the first images the would have been published. I took lots of notes on the ones I liked, so I’m all prepped for next year when they say I’m not allowed to use the internet to find pictures. Life gets tough at Uni, Kids! 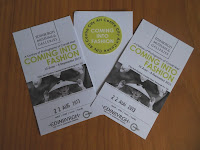 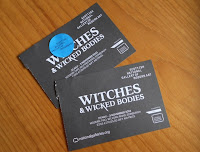 I decided to wear one of my new tops, from USC, since I absolutely love it. The colour is nothing like anything else I have in my wardrobe. I wore it with some standard jeans and a black cardi. I realised this morning that I accidenally forgot to pack any other shoes apart from my dolly shoes and these trainers. Whoops! I remember looking for other shoes, but then I must have got distracted and gone looking for something else. Easily done.
For the first time ever I have actually decided to bring accessories with me on holiday! I never normally do. It just slips my mind. I put on a silver and blue necklace on, which has similar blue tones as the top. I also appear to have packed a lightweight scarf. Check me out! I think the plum purple colour goes really nicely with the aqua tones of the top. A slick of fuchsia pink BarryM lipstick and I was ready to face the day. I’ve got my glasses on it the piccy, they make me look intelligent and as if i’m truly fascinated by the composition of the pieces which reflect to fashionable nature and really explores the hidden meaning of the works. #thingsartstudentssay 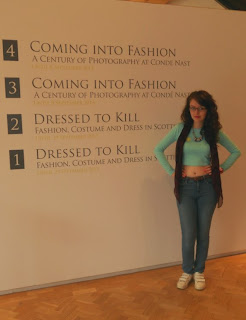 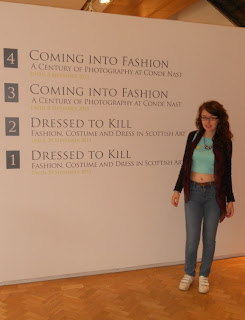 I also went to an exhibition in the afternoon called Witches and Wicked Bodies, which was about…well…Witches. It had a collection of early etchings of Witches and lots of information about how witches were seen and what they supposedly did. I didn’t know that witches were thought to have rubbed a disgusting concoction, including crushed bones of unbaptised infants (grim), over themselves which allowed them to fly. I thought they just happened to be able to fly, who knew? There was one large modern photographic piece which was by an artist Cindy Sherman. This is a lady I studied at AS/A Level, she uses prosthesis in lots of her work but I didn’t. My little sister was a little shocked when I pointed out that this was who I was trying to be. Below is an image of a piece of modern art outside the gallery. It was on the front of my handbook for my Art Foundation, but I still managed a Merit! 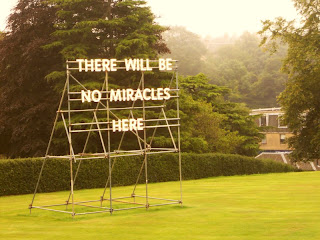 Jessie J’s new tune, It’s My Party has been making it way onto the air waves recently and now it’s even on my tellybox. It reminds me of Domino, that kind of happy-party-boppy feel. I still find it weird when songs mention Twitter or Tweeting since I still think it’s quite a new thing! (I’m such an old woman). I’m actually quite excited for her second album, it’ sounding good so far. Also, I’ve noticed that there has been a trend for artists to release a big song for their first from the album, then a slow one for their second-usually to show a variety. But I’m liking that there a change, and many acts are just going for the party tunes as singles. Wild and It’s My Party are the perfect examples.