Hey Guys!
This is an outfit of the day from when I travelled back home from holiday earlier in the week. I decided to wear my new pretty dress from Primark. I look pretty dressed up for a 7 and a half hour squashed car journey. And I did get lots of looks at the service station, where we took them. But they were probs just well jel that they didn’t try hard enough to be taken note of along the motorway on their travels. HeHe! I chose to wear the dress mainly because, as I explained in my first on my holiday posts, I don’t like anything fitted around my tummy when travelling. The dress is nice and loose and flexible to I could contort myself into different positions to fit myself around the luggage in the car. It was like a giant, human game of family Tetris!
I wore my floral crown again since I didn’t want it to snap underneath other heavy items. I think it actually goes well with the dress as it ties in with the whole floral/girly vibe. The white cardigan is something to wear as a cover up if you were to wear this at a late afternoon picnic. So as it gets late and cooler its something to throw over the top. But I think the dress looks much nicer without the cardi as you can flaunt the dress to its full potential! I think that the blue is a bright shade and pops so well in contrast to my greyer surroundings. The cut out design at the front is replicated at the back. I wouldn’t normally like a cut out back, but as its at the top I think it’s much sweeter. Less slutty. Although it does mean you have to be weary of the sneaky awkward tan line! Nothing a bit of sun tan lotion won’t sort out.
My sunglasses are also new from Primark. They look better with my fringe down. The trainers are my go to travel shoe (mainly because they won’t fit into my fully packed bag!), but I don’t think they look too out of place with this outfit. Obviously they wouldn’t be my first choice to go with the dainty dress, but they don’t create too much of an eyesore.

I’ve just realised every component of my outfit (except the shoes and watch) is from Primark. It goes to show you don’t have to look scruffy if you’re a cheapskate. You can actually look quite nice.
(Excuse the creases at the bottom of the dress. I’d only been squished up for 2 and a half hours at this point.) 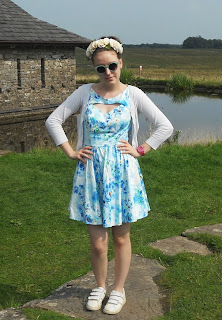 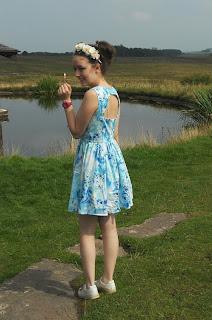 The music for this post isn’t new, but every time I think of it I have to listen to it straight away! It’s Beyoncé- Why Don’t You Love Me? I love the retro sound of it and the emotion (it’s not blubby wailing, but the passion and anger she sings with I suppose). The video is probs one of my all time faves EVER! The styling is super cool, it had a sexy 50’s vibe going on. I didn’t realise how old that song is, but it will never get old to me. I’m not even that much of a Beyoncé fan, but there’s not denying she’s good at what she does.