Hey Guys!
Last Saturday I had an interview at Southampton Solent for Fashion Promotion and Communication. Fancy! This is the outfit that I wore. I didn’t feel over dressed because a girl who goes to my current Uni was in her tweed blazer so we both looked pretty smart. There was a little group of 6 of us having 15 minute interviews one after the other. So having been told I was going to be there 5-10 minutes, that turned into 2 hours! But I think it went really well and the lady seemed really impressed that I was so passionate about what I know I want to do in the future. But they were meant to get back to me by Tuesday, and it’s now Thursday so…
The black lace top is actually a dress which was too big when I was originally given it. But now I appear to have grown and it’s turned into a bit of a bum-skimmer. Although I did have my black thermal underneath, so maybs it would sit better without that. The skirt was originally part of a dress, but for my most recent art project I took the top and bottom half of the dress apart. It was a size 12, so it was just the right bagginess to paper bag waist it with a medium sized tan belt. I adore the necklace. It’s a golden spiked necklace with red wooden beads around the back. That was a charity shop find, initially for the art project but I love it so much I’m keeping it for me! I think it was like £2-£3 so total barg! Black tights and dollies shoes were simple additions to the look so the red skirt stands out and makes for a more dramatic look. But tan tights would make it lighter for a summer look.
Loving a little bit of pale red lippy, since I haven’t worn lippy for so long! I miss it!
NIGHTMARE! After  the interview we drove of a few miles to find this park to take the photos in. But as I was getting out of the car I realised that I’d left my ring neck to the sink in the loos at the Uni. Silly sausage! So we had to race back to get it since it was a lovely ring from a family I babysit. It wasn’t a Primarni purchase I know that’s for sure! So I legged it to the loos (dodging the student ambassadors trying to convince me I was here for the interview I’d just had) and… I found it! I was literally about to have a panic attack if it wasn’t there. That’s how miffed I was. I’ve decided that although the ring-bracelet combo pieces of jewellery are a glamorous addition to an outfit. Really they are for people like me who need baby reigns on their rings!
Songs that made the post: Tyler James- Worry About You (Tuunnneee!) and Nick Jonas- Critical (Alright I’m having a little disney star fest atm. Give me a mo, I’m sure it will pass!) 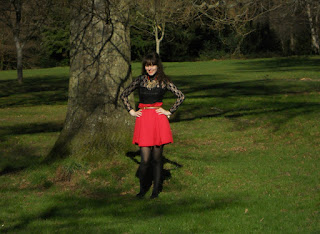 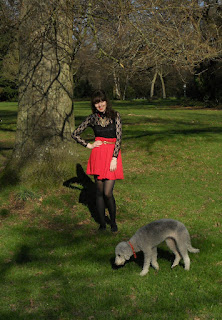 Such a lovely sunny day!
Oodles and Toodles
Row Bow
x
P.S Say hello to my little friend (the doggie in the picture). I’ve decided that she looks like a Polly, and she defo thought I looked hot. She came for a cuddle but I was in a little bit of a tizz about my ring!