I’m not going to jump into this post pretending that I really know anything at all about NFL. But what I do know is how to style a cute outfit! I’ve decided to style a game-day look based upon an NFL jersey. Since the team names mean absolutely nothing to me, I based my decision purely around the colour combinations of each sports top. Was I to go for the rich reds of the San Francisco 49ers? Or perhaps cool green of the Philadelphia Eagles? Nope, neither of those made the cut. For me, the brilliant navy, white and grey team colours of the Dallas Cowboys was the winning choice. Also with a team name that includes the work ‘Cowboys’ how could I not support them?! I think that this jersey would be really versatile because of the colourings. Therefore, you could create a new look every time you watched them play! Isn’t that what every sports fan dreams of?

Now I’ve done a little research for my newly found team so here are some must-know facts for newbies of the game:
-Most importantly their team mascot is called Rowdy, although apparently not so frequently spotted nowadays, it’s hard to miss his gigantic-sized grey cowboy hat emblazoned with the Cowboy’s signature star logo.
– The Dallas Cowboys have been established for 54 years, which is more than twice the time I’ve been alive for.
– From what I gather, during the 2014 season they have won 9 games which makes it a winning season. Their first since 2009. Woohoo!

Well, now that we’re all clued up about my babes the Dallas Cowboys I’ll show you my game day look. I’ve put together a little something for if you’re planning on having a little NFL sesh in front of the telly. Obvz, I started by including the team top and paired with some jazzy leggings it to make it super comfy. The cosmic print means if you decide to have a little NFL party, you’ll look suitably dressed up which can be tricky when wearing a sports top. Since it is December, it can be a ruddy cold, even when snuggling up on the sofa, so these Pom-Pom Ballerina socks are the perfect addition for toasty toes. Because the team jersey is big and baggy, you wouldn’t want to squeeze it underneath a small fluffy jumper. So this large see-through knit is ideal so you can still your team number through it. And just to finish off the look, I love this knitted head band with a beautiful scandi print. 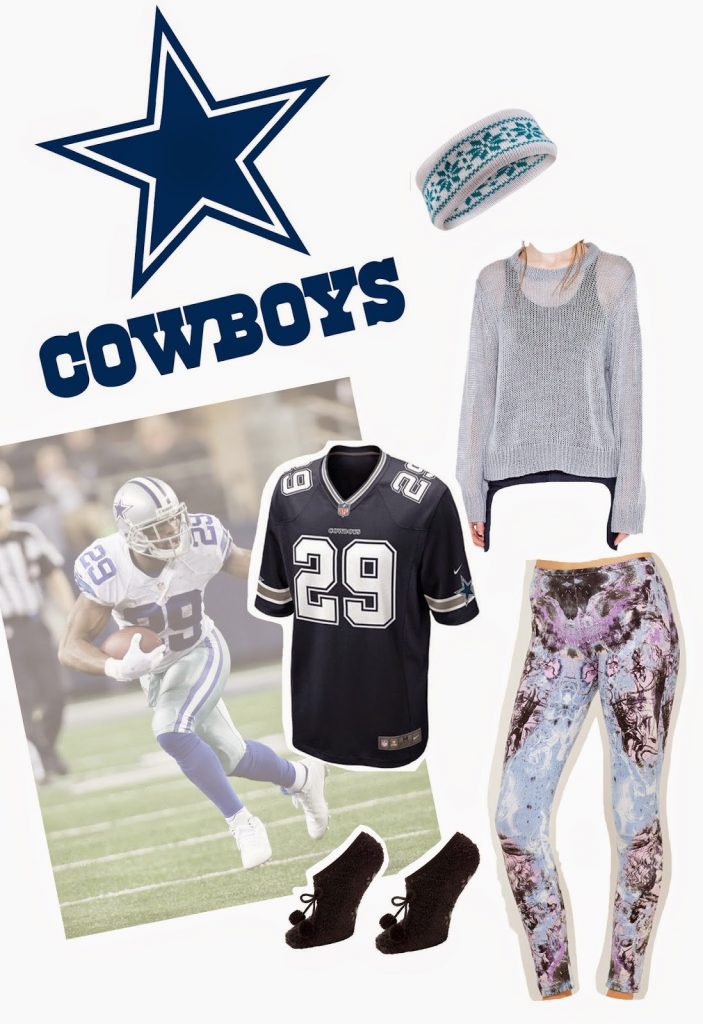 So there we go. A wonderful game day ensemble, but an NFL newbie.
What do you think?