Hey Guys!
I had one last meet up Lunch with my closest chums at the beginning of September. Instead of what I actually wore I have a few pictures of what I wanted to wear. I had to walk there in the pissing rain and got drenched even though I whipped out the rain mac AND the umbrella. 30 minutes in the rain all by myself and when I get there an old bus buddy had driven to the shops opposite and arrived literally just as I did. Sod Law or what?!
When I did get there we had a nice catch up and talked lots about Uni, leaving, returning, buggering off to America and the like. For lunch we made our own Pizzas. Totally from scratch, including the dough. It was an eventful lunch making. It was suggested we ‘drizzled’ olive oil over the pizzas. But as each one of us tired to show our own technique we all ended up drenching our pizzas in olive oil. Personally, I thought I was onto a winner by pouring the oil onto a spoon but then I giggled and missed the spoon COMPLETELY! They still tasted good.
I wore tobacco chinos and my white neon striped jumper from Kylie. But had it have been a nice day/ I had got a lift I’d have gone with this little number. I really wanted to wear this lace design skirt because I bought it when I went shopping with my friend and I wanted to show her what it looked like on without a pair of trousers on underneath. I bought the skirt from the shop Republic in town since it was the last day of the closing down sale. It’s so similar to some of the Louis Vuitton S/S 2012 pieces. Remember when they had the pretty floral lace pieces in an array of pastel colours? #alltimefavecollectionEVER!
It had a small break in the hem of the skirt which was annoying because it meant the fabric was starting to fray. But a little Row Bow magic and I fixed the sucker! The skirt is quite low sung, it doesn’t quite sit on my waist more on my hips. That might be the design or the size, either way I’ll make it work. I can imagine wearing the skirt to a Wedding or special occasion like that (I’m willing to be a seat filler!). But for the lunch I would have worn a darker cropped tee. Man, do I love my cropped tops at the moment? Just as the colder weather moves in as well. Nice one Row!
I added a thick gold chain necklace which has florescent pink chain running through it. I thought I would take this out but actually it makes it look pretty unique and special. I’d been looking for a thick chain necklace for a while and New Look was my saviour. 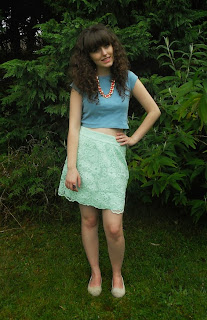 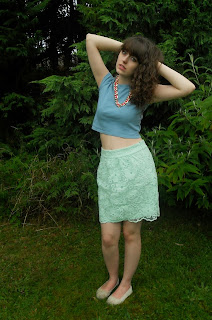 I’m sure you’ve heard Sonnentanz (Sun Don’t Shine) by Klangkarussell with Will Heard. But how many of you have heard the acoustic version? I’m taking the one with Cara Delevingne. It’s soo pretty. Cara is actually a decent live vocalist. I encourage you to check that out!
Oodles and Toodles
Row Bow
x