Hey Guys!
As it’s getting colder, in these winter months, I think I’ll begin taking you on a tour of my kitchen. This is my lovely door which leads to the hall. To my left are teapots, and to my right are recipe books. HeHe!
This is another work outfit. It was all so sensible, until I put the shoes on. It was one of the only mornings that we ended up running around. We played “Two’s Company, Three’s a crowd”, which is basically a cat and mouse game. I ended up being caught, therefore becoming the cat and it was supper tricky trying to catch sprinty little kiddies-they’re so fast! I managed to tag one eventually, but then they ended up being the cat for the rest of the game. Poor kid!
The main attention of my outfit is on the chain print, patterned top. I love the bold blue background colour of the top, it’s an unusual choice for me as it’s a little bold and it’s not pink! It’s quite a short top, but not cropped, so I went with a slightly shorter cardigan. Anything longer would create too many cuts and obvious changes of fabric. I know you’re not really meant to match dark blue/navy with black, but I don’t think it looks too clashy here. The black leggings go with my black fluffy-cuffed boots. Cheeky, you can see my bright pink socks peeping out of the top. But at least my tootsies were toasty!
I’ve lost my simple golden apple necklace, sadface! So I teamed the outfit with a bluey/purple jewelled owl necklace I also wore my blue/peachy toned ring-bracelet combo. 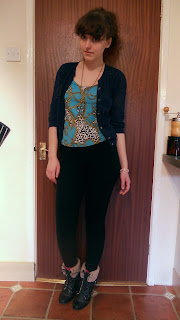 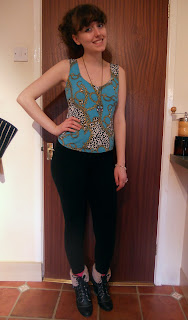