Hey Guys!
This was my look from Friday. It was a pretty crazy day, I was switched about all around the school and didn’t really know which way was up tbh! It makes me feel useful actually as otherwise they’d have to get somebody else in, but they don’t since I’m bumbling about. I started Papier-mâché-ing some chocolate tins so that they could be turned into Caribbean drums for the kids. I worked with two little children who insisted using a paint brush but I meant business as I even removed my rings. I’m a serious Papier-mâché-er! But after only maybe 5/10 minutes of getting messy and gluey I was asked if I could go swimming instead. So then I hopped on the mini-bus and off to swimming I went. Pretty neat actually as the regular swimming instructor at the pool asked on of the T.As, “Who’s that pretty one at the end of the Pool?” That would me Moi, HeHe! I had to wear the blue netted bags, like they do in hospitals, over my dollie shoes so that obviously added to my look. In the afternoon I went back to the Papier-mâché drum class but got told they found someone to help them out so back to my peeps doing the class play I went. I ended up spending the afternoon finishing my cardboard coffin. It looks totes amaze, shame it’ll probs be scrapped when the shows over. I’ve had a couple of little helpers on it, and bless they have worked really hard on it. I hope I’ve been somewhat inspiring!
Anyway back to my clothes since that’s what we’re all here for! I think this is a really different look for me since I’m not usually one for the shirt and buttoned up to the top look. It’s a style which the high streets and shopping centres are full of and because of that I tend to stay away from it. But I’ve given in and think I look quite cute in this. The swallow-print shirt is my sisters so its then kind that has been sewn with plenty of room for boobage. But I don’t need that, so it did sit a bit funny. But nothing a quick reshuffle couldn’t sort out. I wanted to accessorise with a cute satin bow, but since I had to run out the house (AGAIN, Whoops!) I grabbed this spiked necklace which always works well with a collar. I also had two gold and purple rings on my right index finger and left middle finger.
I was going to pin up my hair, bit-up-bit-down stylie. But after the little walk I have once I’ve been dropped off the rain got to me and drenched my hair so I just left it au natural. I’m impressed with how curly it has gone, and only a little frizzy. Turns out Frizz Ease really does do what it says on the pot! I was desperate to wear my orange lippy so I did! 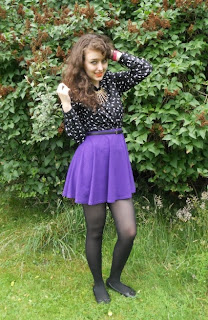 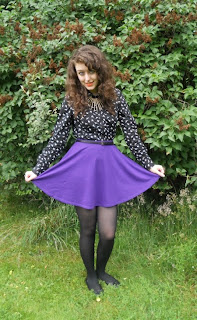 I’m loving Avicii’s new tune Wake Me Up featuring Aloe Blacc. It like acousticy dance and is pretty cool for Summer! What has been Aloe been up to recently? He seemed to disappear of the face of the earth after I Need a Dollar.
Oodles and Toodles
Row Bow
x