Hey Guys!
I can’t believe it actually snowed last weekend. The sight of my my garden covered in snow made me soo annoyed. I really wanted to wear my Dressing Up Post outfit. But it was waaay too cold for that. So I decided to keep the girly vibe and try and brighten up everyone else’s day and and look summery, but keep warm. I love this skirt, but I’ve hardly worn it. it’s really round as it had a short layer of gathered netting underneath the patterned fabric, which creates an evenly profound shape. It’s difficult to find evenly rounded shaped skirts because you’ll usually end up with a bigger tummy of bum. Mine’s usually in the bum department! i thought I had found a good’un with this skirt until one of the tiddly wee’s said ‘You look like you have a baby in there’. i told her that was the best compliment I’d had all day, sarcastically. I wanted a black vest top to use in this look initially. But i think that the longer sleeves work much better with the black block colouring of the leggings on my legs. My trainers are pink camouflage (Side note: I realised that I’ve had these trainers since year 7 the other day. Good Times, small feet!) so the designs goes well with the floral skirt design, as they some what replicate each other.
Somebody thought it was a good idea to add Defying Gravity and Dancing Through Life from the musical Wicked this week. Can’t think who! But now when I’m happily singing ALL the characters parts I do get some strange looks! BTW, I’m defo a contender for the next Elphaba. When the song stated and me and my older sister were at the table, I gave her the part of Glinda and I was Elphaba. She agreed but then questioned why she was the pretty girly one and I was the gritty dark one? It’s called ‘acting’, pfft some people!
‘And nobody in all of Oz, no wizard that there is or was, is eveerr gonnaa bring meeeeee-eeee-eeee dooooowwwnn!’ / ‘You’re perfect’ ‘You’re perfect’ ‘So were perfect together!’ A couple of my faves… 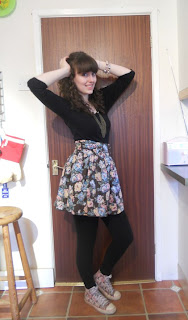 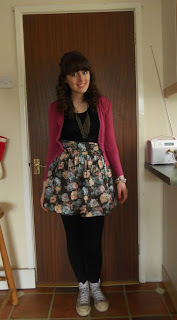