Hey Guys!
It was my first week back at work; after summer, last weekend and I thought I’d test run one of my new Karma Clothing Purchases. I chose my Batman Skirt. But I think it confused some of the littlerler kiddies as they were like, ‘That’s a boys skirt because it has Batman on it’. And one little girl went home and told her Daddy, ‘Daddy, Row is so cool! She had Batman on her skirt today!’ I’m not sure her dad believed her at first. One of the older kids, who I always ask where she got her clothes from then promptly pick up my own pieces, asked where my skirt way from this time. She’s like totally my clothes buddy, but she’s 11/12 so she looks grown up in my clothes and I look like a child in her clothes. But hey-ho, that’s just the way I roll! 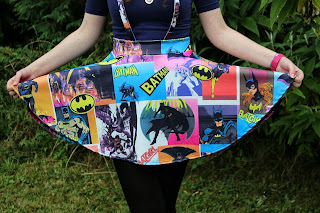 The Batman print of the skirt is obviously the main focus of my look, so I based the rest of the colours upon than. I decided that I wasn’t so much of a fan wearing the piece with a white top so I explored wearing dark colours with it. I chose this bodycon dress to wear as a top underneath. I paired this with black leggings, so the bolder colours of they skirt pop out against the darker pallet. To match the navy tone of the top and the more vivid of the skirt, I wore my new floral trainers. They are from Kylie and were one of my fab purchases from my holiday shopping trip. I’m not quite sure they qualify as high tops, but they do have that chunky padded tongue to the shoe. 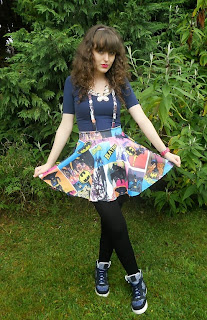 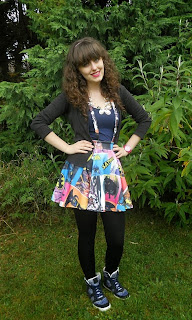 I added a chunky and very blingy necklace which in the pictures is a little twisted. It’s got large gems that sit in golden plates and hangs nicely around the same line as the neck of the top. I wore the necklace quite long so that it didn’t keep hiding down my top. Which it has ended up doing in the pictures, you can’t win ‘em all. I wouldn’t normally wear a thing headband. But I had woken up super early to wash my hair, so I’d kept it in from that. A slick of bright pink lipstick and my look was complete!

I’m love love loving ’s Counting Stars at the moment. I’d heard the song a little bit about the place but didn’t know who it was by. But now I do I can’t stop pressing that play button. Also, I’m sure Jennifer Hudson pops up in the music video. Probs, not tbh, it’ll just be my imagination playing games on me again!
Oodles and Toodles
Row Bow
x