Hey Guys!
So I’ve just come back from spreading my teaching wings, and giving a talk to a class of year 4, 5 and 6 about e-safety on Facebook. Just call me Miss Row Bow! I was worried that none of the kids would actually pay attention and I’d end up sounding mean as I’m very against anyone under 13 using Faceyb since ‘dem da rules!’ (I don’t even think they should have a mobile phone, let alone a Blackberry or iPhone, in Primary school. I sound like such a miserable old bag!) But I have actually done lots of work experience at the school previously a few years agn, and I surprised with how many names I actually remembered! The kiddies were really good and gave a great discussion and asked lots of questions, which made me think more of them have Facebook than actually admitted it. I went in with my Mumma, since she’s savy with tech and stuff. But I ended up taking total control and the kids were addressing me with the questions. Man, I’d be such a cool and popular teacher!
I’m sure the fact that I look pretty cute, helped. I went with a blue and purple colour pallet with silver accessories. I wanted to wear my simple dark red skater style dress, but when I tried it on last night I looked bloomin’ awful. My booty has ballooned apparently! So I went for this purple skater skirt, which is from New Look. It’s a really useful wardrobe piece that goes with everything and is suitable for all occasions. I would have gone bare legs, little white socks and heeled brogues. But since I was at a Primary school I kept it reasonably sensible. The top is a DIY affair. It was a fully sleeved shirt but I took them off and splattered thin bleach all over for a funky effect. It’s pretty cool, I’m not sure if I said before, but the front splatters have a pink haze around them and te back spatters are pure white. I have no idea how I achieved that. Magic, probably! To top actually only buttons up so there is an open neck. But I’ve added 2 safety pins, from the inside to give the ‘buttoned up to the top look’. I was trying my gold spiked necklace on with this look, but it has red beads too which don’t really go with the rest of the look. So I found my short pearl necklace which works really well with the white splats on the top. This colouring is also why I went for the silver belt. The skirt comes with a black thing belt, but I wanted to continue the blue and white/pale pattern.
I have striaght hair this week so I went for a subtle pineapple on top of the back of my head. I’ve used the Frizz Ease 3-Day Straight, but I’ve still had to straighten it every day! It goes flicky at the bottom very quickly. 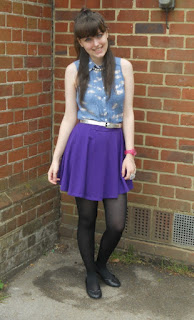 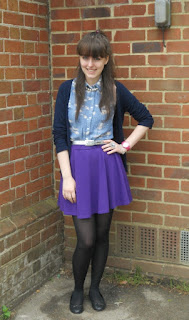 My older sister has come home from Uni recently and had Fall Out Boy’s Save Rock and Roll album playing. So although I’ve not listene$ dto the whole album yet so far I’m liking Where Did the Party Go?, Save Rock and Roll (ft Elton John- say whaa?) and Rat a Tat (ft Courtney Love- again whaa?) as album tracks.